Kohli went on to score 58 off 45 balls with three fours and three sixes. 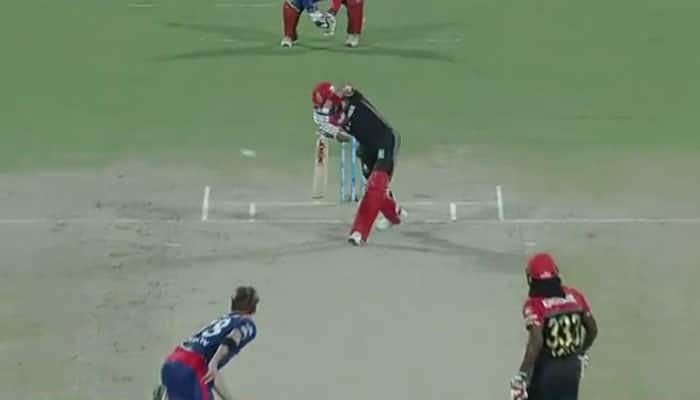 New Delhi: Struggling for form, Royal Challengers Bangalore captain Virat Kohli played one of the greatest shots in cricket during their final IPL match of the season, against Delhi Daredevils.

Batting first, RCB lost opener Vishnu Vinod in the fifth over, thus bringing Kohli in the centre. The skipper started cautiously, but soon took over the contest with some sublime strokes.

Then came the shot which left everyone astounded. In the ninth over, he conjured up a magical shot to hit a six off the bowling off Corey Anderson.

That happened off the first ball of the over. A cross-seam delivery from the Kiwi all-rounder, on a length, which was played defensively on the front foot with the bat showing it's glistening face.

Result was a six, over extra-cover. Flat, and pocketed inside the Delhi dug out. Just brilliant.

In minutes, the Internet was swarmed with Kohli admiration posts. Here are some of the posts in Twitter.

No matter what's result gonna be, Kohli's first six of Shot already made my day. How gently did he do that ? @imVkohli You beauty.

Kohli has just hit a six over extra cover with a shot that was half checked drive, half forward defensive. Staggering timing. #IPL

Virat Kohli just gently pushed the ball over cover as soft as he can still the ball travelled across the boundary for six..

After watching that six of Virat Kohli over cover.. one can easily say "Bat mai spring tha". #ipl

That check drive over the covers for a six by kohli was just awesome.Sheer brilliance.Shot of the season probably.Kohli

That Classic Six from Kohli over covers. .Shot of the Season #IPL 2017

Kohli went on to score 58 off 45 balls with three fours and three sixes.