Well, it looked like a score 230 was not enough against the firepower of Mumbai Indians. But a dream last over from Mohit Sharma changed the course of the match, giving Kings XI Punjab all two points from their must-win IPL game at Wankhede Stadium on Thursday. 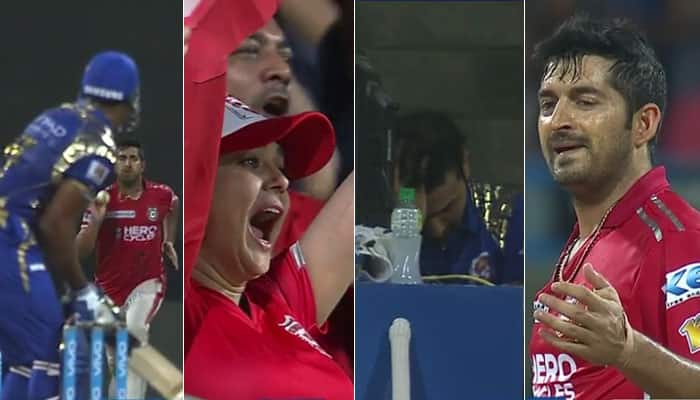 New Delhi: Well, it looked like a score 230 was not enough against the firepower of Mumbai Indians. But a dream last over from Mohit Sharma changed the course of the match, giving Kings XI Punjab all two points from their must-win IPL game at Wankhede Stadium on Thursday.

The visiting Punjab side started on a blazing note when they took on the table toppers at the latter's fortress in Mumbai. Surprise opening pair – Martin Guptill and Wriddhiman Saha – let blitz at Wankhede with their run rate soaring well over 10 even after the power-play was off.

After Guptill's departure, Saha continued with his patient knock while skipper Glenn Maxwell fired from the other end. Shaun Marsh and Axar Patel too played their respective cameos to perfection to help Kings set a massive target of 231 runs.

A sure delight for the fans as they were assured of a win against high-flying Mumbai Indians. But the pitch had a different story to tell, and so thus the home team. It was time for Mumbai to crackle up boundaries at will, and the run rate was hovering well over the required rate.

Bowlers were being changed, strategies were being made, and it did get the wicket of explosive Lendl Simmons, then Parthiv Patel. The openers were followed by skipper Rohit Sharma, once again to a leggie. But the run rate was beyond control, with Hardik Pandya and Kieron Pollard attacking from both ends. The constant firing by the Mumbai batsmen made the massive target of 231 runs look almost like a cake-walk.

Then, it all squared down to the final over. 16 runs were needed. Pollard and Harbhajan Singh were in the centre, while Mohit was given the responsibility to bowl those crucial six deliveries.

Here's how it all unfolded, ball-by-ball:

1st ball - Length ball towards the off stump. Pollard pushed it down to long-on. Maxwell collected it and fired it down to the keeper as Pollard took two runs. But umpire signaled one run off it as Pollard's was short off the crease.

2nd ball - Mohit this time goes for the slower and a shorter delivery outside off. Pollard picked it up to put it over deep midwicket boundary for a six.

3rd ball - 9 needed off 4 now. Mohit looking for a yorker ended up delivering a low full toss. Pollard punched it down to long-off. Quick fielding and the Jamaican refused to exchange strike.

4th ball - Finally the yorker at its best as Pollard dug it out to Mohit himself. No run.

5th ball - 9 off 2 needed. Knuckle ball! Pollard didn’t see that coming, and he failed to strike the ball. Brilliant effort from the pacer.

6th ball – Last ball, and yorker again. Pollard got a thick inside edge and the ball traveled down to fine-leg. Single off it with the Jamaican getting his fifty, but that was just no use.

A brilliant spell under pressure from Mohit set up that improbable win from what could turn out to be a heartbreaking defeat for Kings XI Punjab.

IPL 2017, Match 52: Delhi Daredevils vs Rising Pune Supergiant – Players to watch out for!