While some credit the entire bowling unit, others to the clever field set-up, but a lot goes out to Mitchell Johnson, who held onto his nerves in the final over, brought all his experience to use and restricted Pune from their maiden title. 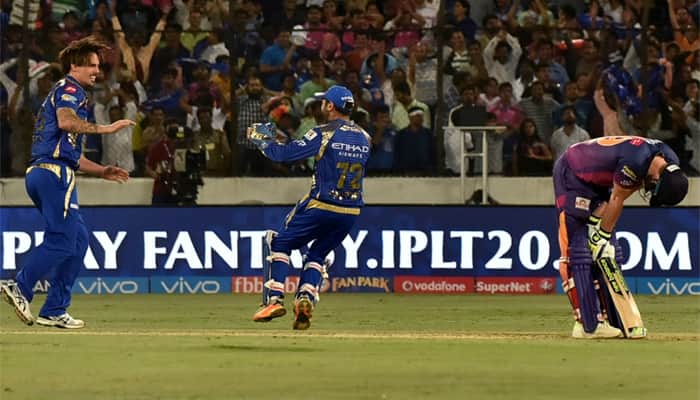 New Delhi: The pulsating Sunday finale squared down to the final over, where Mumbai Indians finally broke their Pune-jinx in a last-ball thriller to defeat Rising Pune Supergiant by just one run and lift the Indian Premier League trophy for a record third time.

While some credit the entire bowling unit, others to the clever field set-up, but a lot goes out to Mitchell Johnson, who held onto his nerves in the final over, brought all his experience to use and restricted Pune from their maiden title.

11 runs, six deliveries to go. It was not a situation that Pune was new to. In their first encounter with Mumbai, earlier in the season, Smith chased down 13 off the final delivery to start off with their winning momentum. Manoj Tiwary, who was at strike, was also quite familiar with this situation, when he struck the winning run for Kolkata Knight Riders in the 2012 final against Chennai Super Kings. But May 21 just wasn't the night for the Giants.

First ball, off-cutter, well outside off as Tiwary shimmied to the left and swept it over square-leg for a boundary. The equation lowered to 7 off 5. Second delivery, anticiapted off-cutter, but ball slowed down. Tiwary mistiming his stroke sends the ball straight to Kieron Pollard at long-on.

Washington Sundar walked in next, with Smith at strike. 7 still needed, but now off 4. Rohit Sharma came up for a short discussion, some field changes made and Johnson was ready for the third delivery. Off-cutter again, fuller outside off stump as Smith with a half-volley lofted it over point and Ambati Rayudu took it in the deep. RPS' last remaining hope disappeared with the dismissal of the skipper as everyone from MI dug-out ran in to celebrate the joyous occasion.

7 still required for Pune, and now off just 3 balls. Dan Christian walked in. Fourth ball, yorker, outside off as Sundar failed to strike, but cleverly got Christian on strike.

6 off 2 for RPS. Fifth ball, over-pitched, down leg side as Christian flicks it over midwicket. Hardik sprinted in and dived, but failed to take a catch it as the Aussie all rounder got two runs off it. Final delivery, and Pune needed 4 runs off it. Three runs would have turned it into a Super Over.

Last ball, just short of a yorker, but again down leg side. Christian pushed it through deep square and deep midwicket. J Suchith ran in, fumbled, allowing them to take two runs, but threw it just in time to cease Pune from taking it into the tie-breaker round.

Mumbai Indians wrapped up Pune's hope of a maiden title as the IPL giants inscribed their name for the third time in ten years of the cash-rich league.