WATCH: Virat Kohli screams after being dismissed for 58 during DD vs RCB match at Feroz Shah Kotla

With Kohli still at the crease in the 17th over, RCB had a chance of reaching a huge total but DD skipper Zaheer Khan provided his team the much-needed breakthrough in his last over. 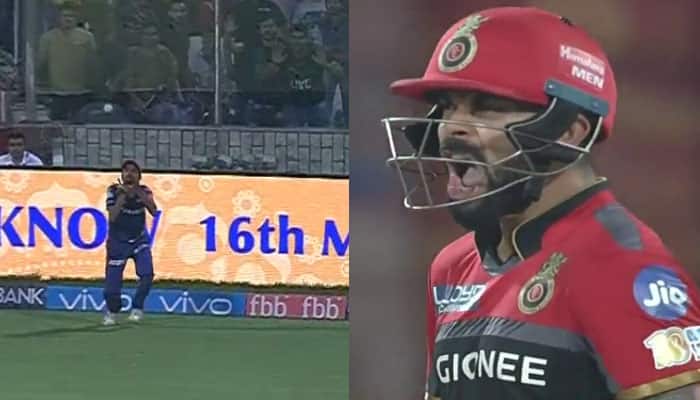 New Delhi: Royal Challengers Bangalore (RCB) skipper Virat Kohli ended the tenth edition of the Indian Premier League (IPL) on a positive note as he not only slammed a fifty in Bangalore's last league game, but the team also ended on a winning note.

Kohli, who scored close to a thousand runs last season, wasn't in the best of form after recovering from a shoulder injury as a result of which he also had to sit out of the first few matches in IPL 2017.

But when he joined the squad, RCB witnessed an inexplicable slump in form as some big names in Chris Gayle, AB de Villiers and Shane Watson struggled to find rhythm right throughout the tournament.

Playing at the Feroz Shah Kotla stadium on Sunday, Kohli got some runs under his belt as he hit 58 runs in the last league game of the tournament.

With Kohli still at the crease in the 17th over, RCB had a chance of reaching a huge total but DD skipper Zaheer Khan provided his team the much-needed breakthrough in his last over as Kohli mistimed one of his shots straight to long-off.

The moment the catch was taken by Shahbaz Nadeem, Kohli looked miffed with himself as he yelled in frustration.