At least 86 terrorists have been killed this year in the state in terror activities, while 20 others have also been apprehended so far. 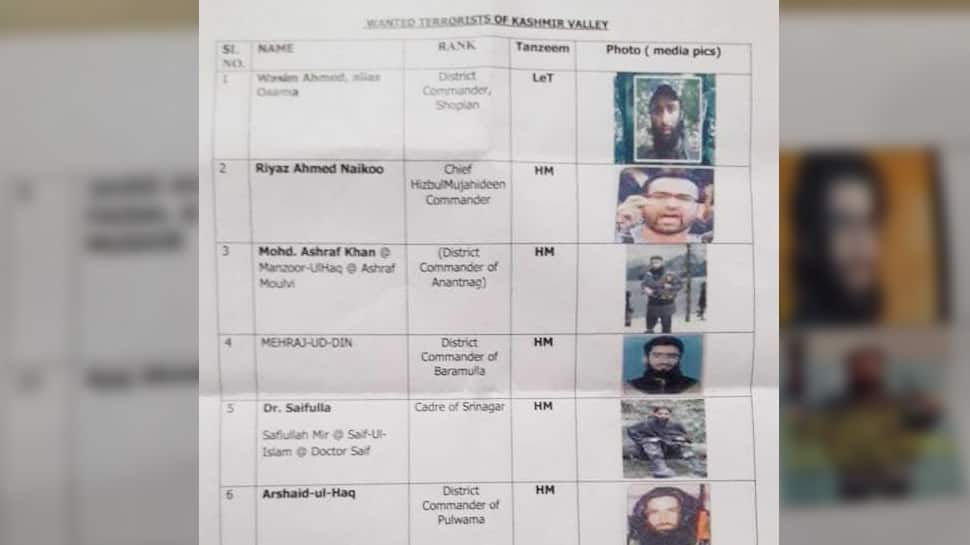 SRINAGAR: The security forces in Jammu and Kashmir have released a list of top 10 wanted terrorists in the Kashmir valley. The list is part of the efforts of the security agencies to combat terrorism in the Valley. Hizbul Mujahideen chief in the valley Riyaz Ahmed Naiku, who has been associated with the terror group since 2010, tops the list.

Also in the list are Mohammad Ashraq Khan in Srinagar, Mehraj-ud-din in Baramula, Dr Saifulla in Srinagar, Ajaj Ahmed Malik in Kupwara and Arshaid-ul-Haq of the same terror outfit in Pulwama.

From the Lashkar-e-Toiba, Wasim Ahmed alias Osama who operates in Shopian is also in the list. Hafiz Umar and Zahid Sheikh of Jaish-e-Mohammad have also been named along with Javed Ahmad Mattoo of Al Badr.

General Officer Commanding in Chief (GoC-In-C), Northern Command, Lt Gen Ranbir Singh had recently said that 86 terrorists have been killed this year in the state in terror activities. "During this year, we have been to neutralise 86 terrorists so far. Twenty terrorists were also apprehended. Our operations against terrorists will continue. A number of ultras have been brought back to the mainstream with the help of the parents, teachers and senior citizens," Lt Gen Singh said. He added that the security situation in Jammu and Kashmir is "under control".

However, Lt Gen Singh said that Pakistan is continuing with its anti-India activities along the Line of Control (LoC) by trying to infiltrate terrorists into the Valley. He vowed that operations against the ultras will continue. "The security situation in Jammu and Kashmir in under control," Lt Gen Singh was quoted as saying by PTI.