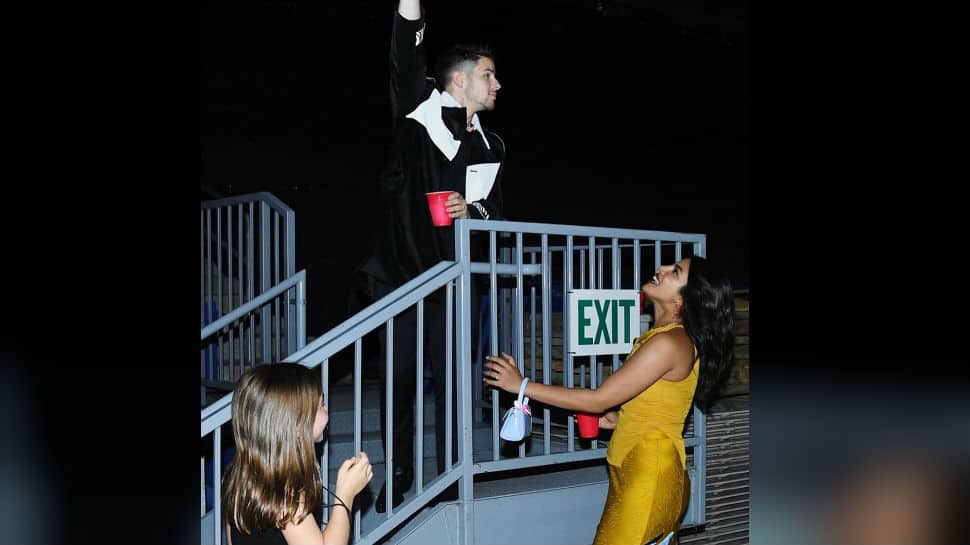 New Delhi: Priyanka Chopra and Nick Jonas has their own Romeo and Juliet moment in California on Sunday. The 36-year-old actress shared the pictures from the night out on her Instagram account and captioned it as, "Romeo oh Romeo.. and Ava drew night out."

In one of the pictures, Nick can be seen standing in a balcony with a paper cup in his hand while Priyanka looks at him from below. The couple is accompanied by a little girl, perhaps the Ava, whom Priyanka mentioned in her caption.

From the post, it is clear that Priyanka recreates Romeo`s role as she stands below calling out for Nick and the he stands in Juliet`s place. Priyanka looks chic in a bright yellow top and skirt while Nick complements her in a black jacket and black pants.

Nick, who never fails to drop a comment on his wife's posts, also commented on their photo and wrote, "When bae's been on the gram too much."

The picture appears to be taken at the Jonas Brothers' - Nick, Kevin and Joe's - iHeart Radio`s Wango Tango concert on Sunday night. Take a look:

Priyanka and Nick married in a lavish wedding in December 2018 in Jodhpur's Umaid Bhawan Palace. The couple later hosted three wedding receptions in New Delhi and Mumbai for family, friends and film fraternity.

Meanwhile, on the work front, Priyanka is all set to make her comeback of sorts in the Hindi film industry with Shonali Bose`s The Sky Is Pink. In Hollywood, she has also collaborated with American actor Mindy Kaling for a wedding comedy.