With the semi-final spot up for grabs, Haryana skipper Mohit Sharma handed the responsibility to defend 18 runs to seamer Sumit Kumar. However, what followed next was a complete turnaround as Baroda batsman Vishnu Solanki smashed a maximum of the final delivery and helped his side complete an epic win. 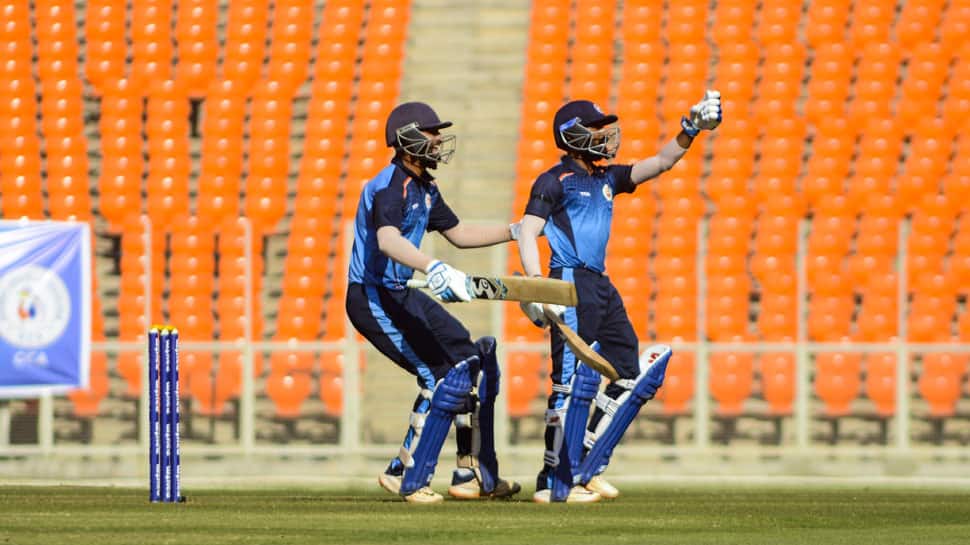 Cricket has witnessed several nail-biting moments and the ICC 2019 World Cup final between England and New Zealand is a classic example of it. A similar incident took place in the ongoing Syed Mushtaq Ali Trophy on Wednesday as Baroda required 18 runs in the final six deliveries against Haryana.

With the semi-final spot up for grabs, Haryana skipper Mohit Sharma handed the responsibility to defend 18 runs to seamer Sumit Kumar. However, what followed next was a complete turnaround as Baroda batsman Vishnu Solanki smashed a maximum on the final delivery and helped his side complete an epic win.

The over started with Solanki's partner Abhimanyu Rajput taking the strike and the duo could only manage to add three runs in the first three deliveries.

However, Solanki soon shifted gears and smashed a six, a four, and a six in the final three deliveries as Baroda won the contest by eight wickets.

Here is a video of the incident:

During the course of his innings, Solanki also reminded the cricket enthusiasts of former India skipper and renowned finisher MS Dhoni, as the right-handed batsman executed a helicoter shot to close the match. Solanki finished the match unbeaten on 71 off 46 deliveries, which included four boundaries and five maximums.

Earlier in the day, Baroda won the toss and invited Haryana to bat first. The Baroda bowlers did justice to the team's decision to field first as they restricted Haryana for a paltry 148/7 in 20 overs.

In response, Baroda openers Kedhar Devdhar and Smit Patel took things slow, before the latter was removed Yuzvendra Chahal in the final over of the powerplay. However, Solanki stood firm on his ground and helped his side finish the contest on a winning note.