New Zealand consolidated their spot in the semi-final race after thrashing Namibia by 52 runs in a Super 12 match of the ICC Men's T20 World Cup 2021 at the Sharjah Cricket Stadium on Friday. With this win, New Zealand climbed to the second spot in the Group 2 points table of the mega-event. 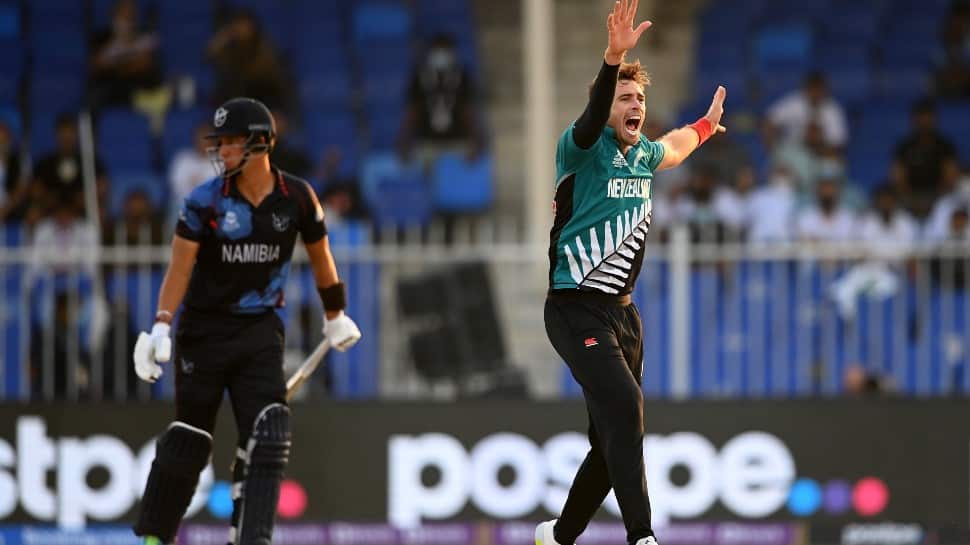 New Zealand batters James Neesham and Glenn Phillips thrashed Namibian bowlers as their side defeated Namibia by 52 runs in their Group 2 Super 12 fixture in the ongoing ICC Men's T20 World Cup here at the Sharjah Cricket Stadium on Friday.

Both Neesham and Phillips played breakthrough knocks of 35 and 39 runs, respectively and brought New Zealand to a defendable total of 163/4.

Namibian openers started off well with Stephan Baard and Michael van Lingen playing a partnership of 47 runs. The first success came to New Zealand after 7.1 overs when Lingen was dismissed by Neesham and the team's total read- 47/1.

The wickets kept falling for Namibia as Baard, skipper Gerhard Erasmus was also dismissed. The side tried their level best in the match but fell short of 52 runs.

Bowlers Tim Southee and Trent Boult also restricted Namibia from chasing the target as they scalped two wickets each by giving just 15 and 20 runs in their entire spell.

Put to bat first, New Zealand opened to a good start with openers Martin Guptill and Daryl Mitchell thrashing the Namibian bowlers. But, the happiness didn't last long as Guptill was dismissed by David Weise, and the total after 4.1 overs was 30/1.

Later, Kane Williamson joined Daryl and the duo struck a boundary each in the last two overs of the Powerplay but Bernard Scholtz removed Daryl in the 7th over. Williamson and Devon Conway then played a steady partnership of 38 runs.

The partnership came to an end after Erasmus bowled Williamson's and sent Conway back after a run-out. By the end of the 14th over, New Zealand's total was 87/4 with Neesham and Phillips taking the charge and finishing the innings with an unbeaten partnership of 76 runs off just 41 balls.