We needed somebody like Ben Stokes to achieve the target: Rohit Sharma

England secured a place for themselves in the semi-finals by ending India's unbeaten streak in the tournament. The Eoin Morgan-led team defeated the Men in Blue by 31 runs. Indian batsman Rohit Sharma put up a great show by registering his third hundred in the ongoing World Cup. 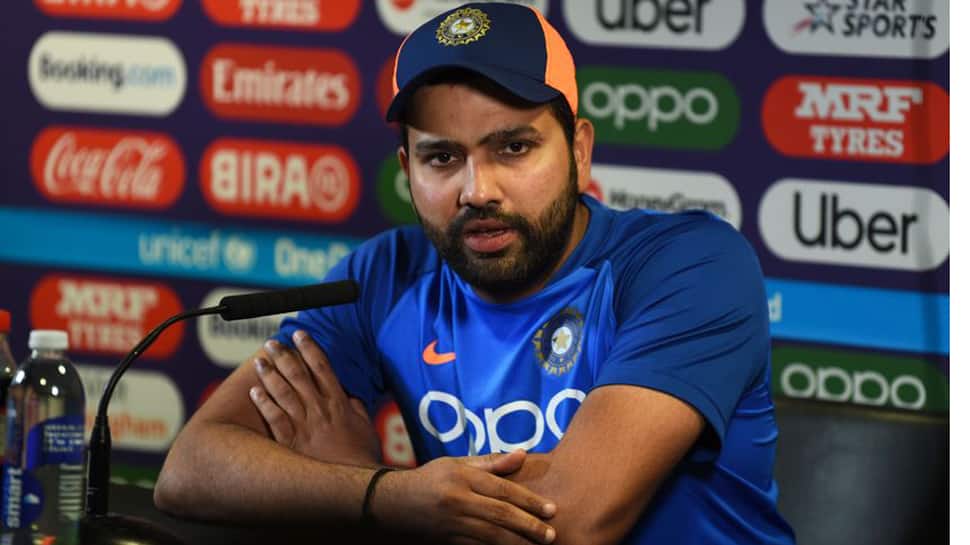 England secured a place for themselves in the semi-finals by ending India's unbeaten streak in the tournament. The Eoin Morgan-led team defeated the Men in Blue by 31 runs. Indian batsman Rohit Sharma put up a great show by registering his third hundred in the ongoing World Cup.

Here are the excerpts from Rohit Sharma's post-match press conference

Q. Rohit, well played. Heading into an important stage of the World Cup, how destabilizing a factor is the uncertainty of a Number 4? Or is it?

ROHIT SHARMA: There is no uncertainty. I mean, I thought we made it very clear at the start that Vijay would play, but before the game he got a toe issue. He got hit on his toe by Jasprit in the net session, so he was not fully fit for this particular game. Again, every team will have one or two or three unsettled players. That is what it is.

The tournament we've seen, there has been changes every now and then in each score because of the, first, based on the opposition that the team play and the conditions as well. So there will be one or two changes happening every now and then.

Q. Rohit, do you think the first ten overs where India made 28 runs in the first part of play and then in the final 15 overs when they slowed down a bit, especially the Mahe and Kedar partnership, which had a lot of singles, do you think those are the two phases where possibly things could have been different?

ROHIT SHARMA: Yeah, when you lose the game, there will be a lot of possibilities of why we lost the game. Losing an early wicket always puts you under pressure, and we lost KL right at the start, and they bowled pretty well in the first ten overs. Good channels.

So it is important that the guy who is in form needs to bat as long as possible. That was between me and Virat. We wanted to make that partnership big, and we wanted because we knew the longer we bat, the easier -- not rather easier, but the closer we'll get to the target. So that was the idea. We took our time, yes, but the condition was such that it didn't allow us to just come and bat and put pressure on the bowlers that bowled in the right channel.

ROHIT SHARMA: I mean, it's always challenging for the bowler, especially for the spinner, if you don't have any wickets down, and we know that they like to put pressure on the bowlers. And when Kuldeep and Chahal came to bowl, they already got off to a decent start, and they didn't allow them to settle down, which was, I think, a tactical move from their side against our two spinners.

But like you said, it was just an off day for these two guys. We have seen them bowl in tandem really well and put pressure on the batting unit, the opposition rather. So it's just one off day. Like I said, the England team, they played complete cricket. They bowled really well. They batted really well. They got the result.

Q. Rohit, congrats. As you said, do you think there's a need for a sixth bowling option on this Indian team? Today England had six bowling options, and they didn't use Adil Rashid and Ben Stokes.

ROHIT SHARMA: We have Kedar Jadhav.

ROHIT SHARMA: What can I say if he didn't bowl? Because of the condition, I guess, because there were two right-handers batting for the majority of the innings. They got like 160, 170 over that partnership, and when you have that kind of a start, it's not easy for the sixth bowler to come and bowl. We saw, even their team, the sixth bowler didn't bowl many overs. Adil Rashid is their prime bowler, bowled only, I think, six overs, and Stokes bowled four overs.

It just depends on how the game is going at that particular moment. Because we -- yes, of course, we need that option. In the middle, we always have that option, but we thought today was not the day that we could use that option because our five bowlers who were bowling, they bowled pretty well. They created chances as well. You've got to give credit. They batted pretty well.

Q. Rohit, three 100s in one edition of a World Cup. Congratulations. I just want to know for an opener, in particular, what's the pressure which he feels when the target to be achieved was almost 350?

ROHIT SHARMA: Yeah, of course, there's a lot of pressure because knowing that if the guy -- I mean, especially, if someone's batting well through the tournament and the team looks up to that particular individual to bat as many overs as possible because he's in such form. So my job as a batsman was to do the same because I've been batting well. So I wanted to bat as many overs as possible and make sure that we get closer to the target.

But anything over 300 these days, we know that with the shorter boundaries, good pitches, it is achievable. It's just that we've got a clear partnership, big partnership. We did that today, one good partnership, but then when you're chasing 330, around 340, you need that X factor inning of someone coming and playing that 70 over 30, 40 balls. Hardik was looking good but couldn't just go on.

So, yeah, that is something from their side Ben Stokes did for them, came and batted and changed the game actually. Until then, we were right in the game, restricted them pretty well. Yeah, we needed somebody like Ben Stokes' innings towards the end to get to that target.

Q. Rohit, with 146-2, were you surprised to see Rishabh Pant emerging out of the pavilion because he had not even played one match and Hardik was obviously man in form?
ROHIT SHARMA: Not really because all you guys wanted Rishabh Pant to play, right?

I think, for someone like him also to come and play, he needs some time in the middle to spend and see what the pitch is doing, get used to the condition as quickly as possible. So I think it was the right move for him to come at that number because, again, we know what he can do with the bat. He just needs confidence because, obviously, playing his first game, expecting a lot is not right at the moment from him, but he should just come and play and enjoy his cricket. When he does that, he does well.

Q. Rohit, if you look at the numbers, over the last six years, you, Shikhar, and Virat have scored 50 percent of all the runs scored by India in one-day cricket. Now Shikhar is not on the team. It does probably affect the balance a lot and probably puts pressure on you to actually finish the job, you or Virat to finish, play until the fourth, fifth over, and maybe take the game to the end.
ROHIT SHARMA: It is a duty, actually. As long as I'm playing, I will not think that I have to -- I have done this, and I have to keep doing it. As long as I'm playing, it's the duty, it's the job because in cricket we say forget what has happened in the past, focus on the present, and that is what I try and do, try and stay in present as much as possible, not think about what has happened in the past.

So, yeah, every game for me is a new game, and I try and do the same, try and see if I have the portion to finish the game, finish the game, or bat as long as possible and get the team in good position, things like that. I've said that before as well. Yes, the majority of the runs have been scored by the top three, but that's why we are here, to score runs, and we'll keep doing that as long as we are playing.

Q. Rohit, just taking a cue from what happened today with the DRS, how do you guys go about deciding what parameters you consider and if you are going to challenge your verdict in your fielding?
ROHIT SHARMA: It's a very tricky thing. You're not sure about -- are you talking about today's, Jason Roy's? Yeah, some of the guys heard. Some of the guys didn't. The captain is under pressure. You know, it's not right to expect for him to make those decisions always right because there are a lot of thoughts that comes around with certain players who are fielding inside the circle, some of the guys feel that he nicked it. Some of the guys didn't.

I mean, it's -- if you're lucky, you might get that decision going your way. Otherwise, we saw what happened because you're never sure about if it's perfect or not because sometimes, even when the unbelievable decisions happen, the bowler gets very excited and says, I want to take the DRS, but then he doesn't consider the fact that pitching in line, impact and things like that.

So the captain is always under pressure because of that, because he got to make that decision, and he's not in the position to see whether it pitched in line or not. It's pretty -- if you're lucky, you take it. Otherwise, I don't -- like not too much -- we as a team don't want to look too much into it.