India were reduced to 122 for five at Tea on the opening day of the first Test of the two-match series against New Zealand before rain played the spoilsport and delayed the play at Basin Reserve on Friday. 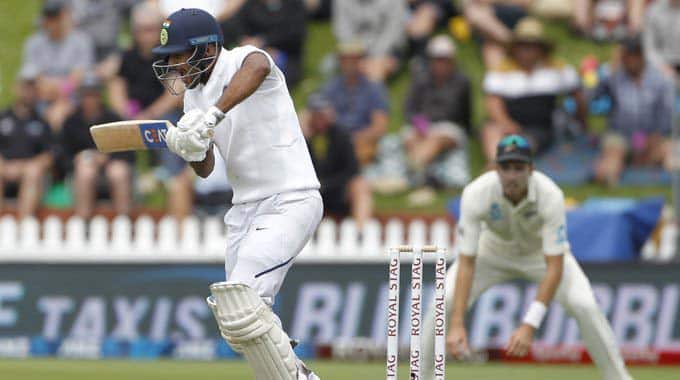 India were reduced to 122 for five at Tea on the opening day of the first Test of the two-match series against New Zealand before rain played the spoilsport and forced early stumps at Basin Reserve in Wellington on Friday.

Asked to bat first, India suffered a batting collapse as they lost their opening four batsmen inside 88 runs.

While opener Prithvi Shaw was clean bowled by Tim Southee for 16 runs, his opening partner Mayank Agarwal (34) was caught by Kyle Jamieson at first leg off a Trent Boult delivery.

Cheteshwar Pujara (11) and Virat Kohli (2) were removed in quick succession by debutant Kylie Jamieson before Hanuma Vihari too went to the pavilion cheaply for seven runs after being stumped by BJ Watling off a Jamieson delivery.

Subsequently, Ajinkya Rahane (unbeaten at 38) and Rishabh Pant (unbeaten at 10) helped India cross the 100-run mark at Tea before rain played the spoilsport and forced early stumps on the opening day.

So far, Jamieson has bagged a total of three wickets for New Zealand while giving away just 38 runs while Trent Boult and Tim Southee chipped in with a wicket each.

Meanwhile, an inspection of the ground conditions took place at 10 a.m following which the umpires confirmed there would be no further play today.