Indian pacer Mohammad Shami did not get the nod in the Playing XI for the all-important semi-final clash of the 2019 International Cricket Council (ICC) World Cup against New Zealand at the Old Trafford Cricket Ground in Manchester on Tuesday, despite bagging 14 wickets in four matches he played so far. 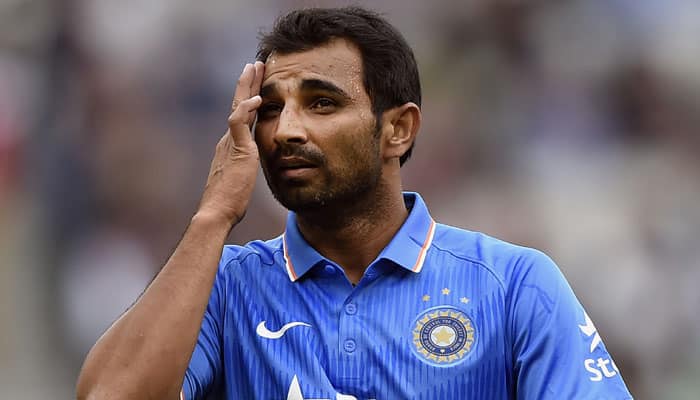 Indian pacer Mohammad Shami did not get the nod in the Playing XI for the all-important semi-final clash of the 2019 International Cricket Council (ICC) World Cup against New Zealand at the Old Trafford Cricket Ground in Manchester on Tuesday, despite bagging 14 wickets in four matches he played so far.

After New Zealand won the toss and opted to bat first, Indian skipper Virat Kohli revealed that they are going with Jaspreet Bumrah, Bhuvneshwar Kumar and Hardik Pandya who all played during their last group stage clash against Sri Lanka while Yuzvendra Chahal has been brought in place of Kuldeep Yadav.

The Men in Blue took a brave call of excluding Shami from the Playing XI despite some of the match-winning performances by him in the four innings he played in the ongoing marquee event.

Shami was called up in the Playing XI as a replacement for injured Bhuvneshwar Kumar during India's clash against Afghanistan. And he did justice to the management's decision by picking up a hat-trick against the Gulbadin Naib-led side and becoming only the second Indian to do so in a World Cup match after Chetan Sharma.

Meanwhile, Shami also finished with the brilliant figures of five for 69 during India's group stage clash against England. However, the Indian pacer's five-wicket haul did not manage to help the Men in Blue clinch victory as the Eoin Morgan-led side registered a 31-run win.

India's decision to drop Shami for the all-important last-four clash against New Zealand did not go well with the fans, with many taking to their social media handles to express their displeasure. Here are some of the tweets:

Okay with Chahal over Kuldeep. Not so much for Shami’s exclusion. Only five bowlers is a possible concern but from that perspective, bowling first isn’t that bad a thing. India bats deep with this combination. #CWC19  #IndvNZ

Like @SGanguly99, I admit I am surprised by the dropping of Shami. He takes wickets upfront and if you do, the death overs aren't as critical. India batting very deep with Jadeja at 8 but it is a big call to leave out Kuldeep against a team he has done well.

Can anyone explain me??...Still No place for shami???a man who has 14 wickets in his bag in just 4 matches... will it be costly for india?? Let's hope for the best! #IndVsNewZealand #CWC19 #Shami @MdShami11 #CWC2019 pic.twitter.com/BxcF8CeB2r

What was the reason behind leaving Mohammad Shami out ? #INDvNZ #CWC19 pic.twitter.com/fvBlz6QRYN

India ended their group stage at the spot, having won seven out of the nine games they played in the ongoing edition of the World Cup. The Men in Blue's league stage clash against New Zealand was abandoned without a ball being bowled due to incessant rain.