Prime Minister Narendra Modi will flag off the Vande Bharat Express on 15 February from the New Delhi Railway station. 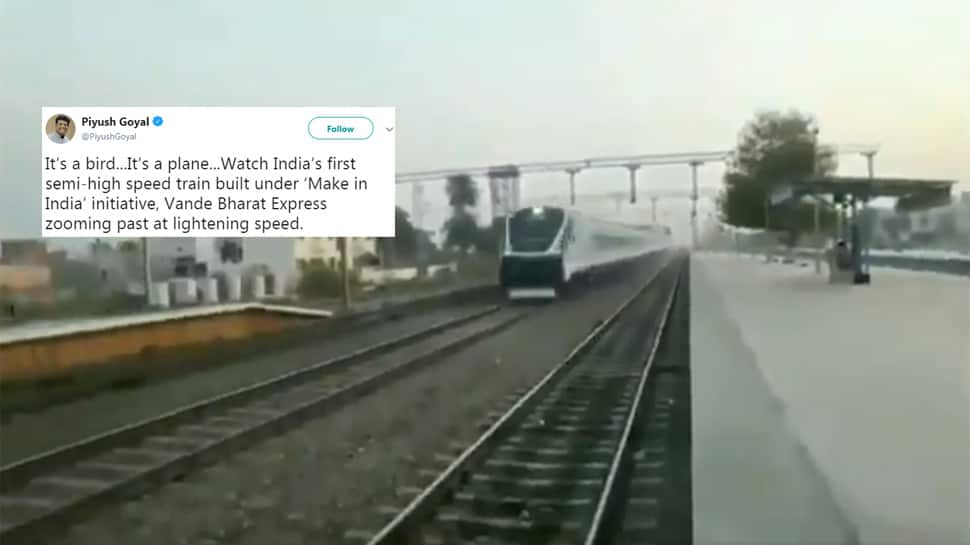 However, soon after the Railway Minister's tweet, Congress claimed that the video has been doctored and edited to show the high speed.

The only thing travelling at lightning speed are Mr. 'Ghotala's' lies. https://t.co/fTSi6yM2Qc

Piyush Goyal ji, enough of your Jumlas. This video has been edited to play in fast forward mode. You have again proved that all that the Modi Govt can do is gimmicks.

Even Shatabdhi, with such editing will look as fast. https://t.co/09rkYg0SH6

Tch tch tch..how much more the BJP will stoop..Piyush ji this is digital India, dream of #RajivGandhiji..if you increase the frame speed it will clearly give away as it does here..don't try too hard..truth is not your cup of tea..PM ji should know better Na?? __ https://t.co/HbBTPcGUiz

In what looked like a reply to the criticism over the train's speed, Goyal tweeted another video of the Vande Bharat Express zooming past a station. "All are welcome to witness its speed and record its inaugural run between New Delhi and Varanasi," Goyal posted another video in tweet.

The much awaited Vande Bharat Express is all set for its maiden journey on 15th Feb. All are welcome to witness its speed and record its inaugural run between New Delhi and Varanasi. pic.twitter.com/8KeAeRJ4fp

Prime Minister Narendra Modi will flag off the Vande Bharat Express on 15 February from the New Delhi Railway station. Train 18, which was recently named as Vande Bharat Express by Goyal, has been manufactured by the Integral Coach Factory, Chennai. It became India's fastest train by hitting speeds of over 180 kmph during a trial run on a section of the Delhi-Rajdhani route.

The 16-coach train will replace the 30-year-old Shatabdi Express and will run between Delhi and Varanasi.

As per a report by news agency PTI, meals on board the train will not be optional for passengers unlike in premium trains such as Shatabdi, Rajdhani and Duronto express, where travellers can choose not to take catering services. However, passengers travelling the last leg on the route of the semi-high speed train -- Allahabad to Varanasi -- will have the choice of opting out of the meals provided by the Indian Railways Catering and Tourism Corporation (IRCTC), in advance while booking their tickets.