It is a light-but-not-really-comic drama of three women who become masters of their hellbent fate and the underworld after their husbands are disposed of to jail after being nabbed for attempted robbery. 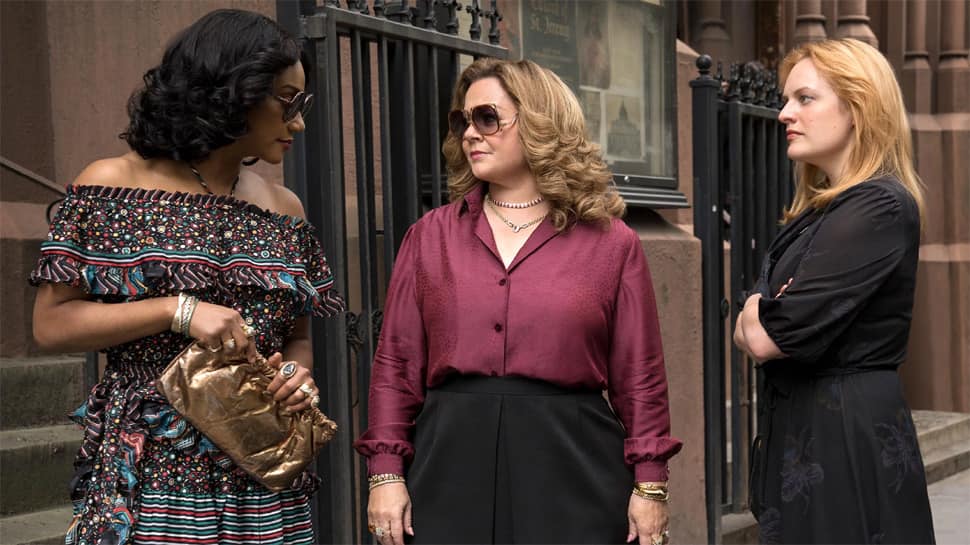 Written and directed by Andrea Berloff and based on a DC Vertigo comic book miniseries published in 2015, "The Kitchen" is a tale of crime and punishment.

It is a light-but-not-really-comic drama of three women who become masters of their hellbent fate and the underworld after their husbands are disposed of to jail after being nabbed for attempted robbery.

The title has a dual meaning. It refers to the Hell's Kitchen neighbourhood where the story is set, and also the room where brutal chauvinistic men think women belong to.

Set in 1978 in New York City, the narrative centres around three sort-of-friends, living in varying states of marital accommodation to low-rung mobsters.

Kathy (Melissa McCarthy) considers her bond with Jimmy (Brian d'Arcy James), her husband and father of her two kids, as a solid one and looks anguished when the judge sentences him for three years.

Claire (Elisabeth Moss) on the other hand, responds with a semi-nervous smile. Having viewed Rob, her sadistic husband (Jeremy Bobb), indulge in domestic violence, we understand her predicament.

Real reasons are obscure for Ruby (Tiffany Haddish), who puts up with Kevin (James Badge Dale), a philandering spouse, and her blatantly racist mother-in-law (Margo Martindale), who never stop seeing her as an unwanted opportunist.

We empathise with their predicaments. Yet, as they seize onto their roles as organised-crime operators collecting protection payoffs, we're in and out of our involvement with these characters, which is based more on the iconography of their empowerment than on a gripping or authentic story.

The script is weak. The ease with which the trio take over the underbelly economy is absurd. Also there is barely a moment's hesitation among the business entrepreneurs as they switch their protection-money allegiance to the new queens in town.

The film marketed as a summer popcorn film, strings together dramatic notes that are generically intimidating sans any impact. The scenes are often weirdly defanged underworld situations and blood-soaked mobster clichés that we know all too well from other films and TV shows. The brutality, when it counts, remains mostly off camera. The deaths barely create a ripple and thus the narrative never gets convincing.

Similarly, the performances of every actor though natural, appear perfunctory.

Visually the look and feel of the film is simply realistic. The period created by the Production designer Shane Valentino along with Sarah Edwards' costume of the 70s captured by DOP Maryse Alberti's lens are rich and rewarding. The era is perfectly canned.

The background score that accompanies the visuals though it boosts the viewing experience, is actually lost in the mediocrity of the tale.