The CJI was accompanied by his wife Rupanjali Gogoi

TIRUMALA: Chief Justice of India (CJI) Justice Ranjan Gogoi, who is set to formally retire on Sunday (November 170, offered prayers at the Lord Balaji temple in the Tirumala district of Andhra Pradesh.

He was accompanied by his wife Rupanjali Gogoi.

Gogoi, along with his family, was accorded a rousing welcome on his arrival at the main entrance of the temple amidst chanting of Vedic hymns by Veda pundits and melam band.

In the sanctum sanctorum, he was explained about the importance of presiding deity and the jewels adorned to Lord Venkateswara. Later the Vedic scholar offered 'Veda Ashirvachanam' in Ranganayakula mandapam. 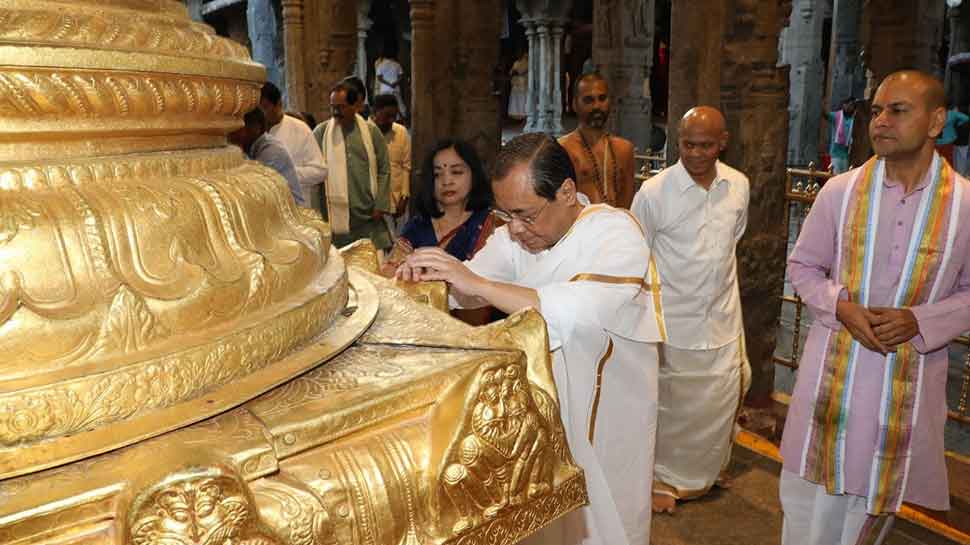 Earlier on November 15, the Bar Association organised a farewell ceremony for Ranjan Gogoi on his last working day.

Gogoi sat with Chief Justice-designate Sharad Arvind Bobde in Court 1, according to tradition, and issued notices in all the 10 cases listed in the Court on his last working day.

He also thanked all the lawyers who addressed him in his honour.

CJI Gogoi, who had held the post since October 3 2018, delivered several historic decisions during his tenure, including key verdicts in highly-sensitive disputes like the Ayodhya Ram Janmabhoomi Babri Masjid title dispute case, the 'Entry of women to Sabarimala Temple' row, and the Rafale deal controversy, and the Assam NRC dispute, to name a few.

Gogoi served as the 46th Chief Justice of India, after succeeding 45th CJI Dipak Misra. On November 17, Gogoi will be succeeded by Judge Sharad Arvind Bobde.