Speaking at the Young Leaders Training Wing programme in Chennai, the Army chief spoke about the situation in Kashmir saying that the fear psychosis is being created by terrorists. He refused to agree to a clampdown in the erstwhile state. 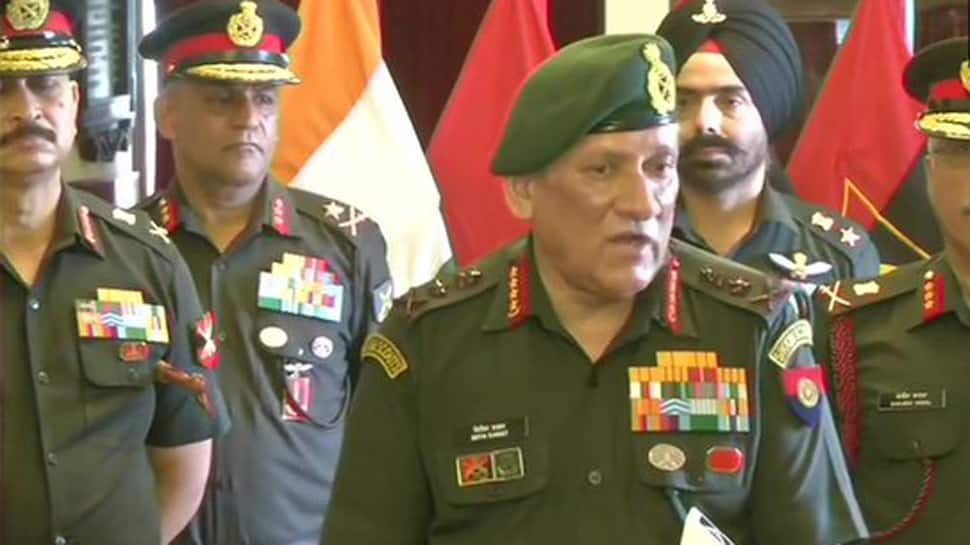 Speaking at the Young Leaders Training Wing programme in Chennai, the Army chief spoke about the situation in Kashmir saying that the fear psychosis is being created by terrorists. He refused to agree to a clampdown in the erstwhile state.

Kashmir has been put under an unprecedented security cover since August when Centre scrapped Article 370 and bifurcated Jammu and Kashmir into two Union Territories (UTs).

Describing the current scenario in Kashmir, where normalcy is returning swiftly, Rawat said that smoke is coming out from brick kilns, adding, "who do you think lit them?". He also said that people are collecting and loading sand on trucks near Jhelum River and heaps of apples are being plucked and packed into boxes.

General Rawat said that terrorists are forcing the shop owners to down their shutters. He asked had there been a clampdown where would the people get their daily needs from and continued whether people can live for such a long time without food, water and milk.

The Army chief clarified that people there are buying dal, rice and milk, aircrafts are flying into Srinagar and taxis are operating on the streets.

"Brick kilns are smoking. Who is lighting these fires? Go to Jhelum River and people are collecting sand. Sand is being loaded onto trucks. Heaps of apples plucked and packed into boxes. Front shutters of shops are closed, as they are forced to down shutters by terrorists. Do you think people are living for this long without food, water and milk? Where are daily needs coming from? People there are buying dal, rice and milk. Aircrafts are flying into Srinagar. Taxis are operating. Can this happen during a clampdown?" said General Rawat.

Highlighting the importance of securing the country`s borders, General Rawat said that every nation has to secure its borders. "We have unsettled borders along the northern front and partially unsettled border along the western front. We have to be all the more alert to ensure that no intrusion takes place along the border," he said.

"We also know that there is state-sponsored terrorism which is being sponsored by our western neighbour and terrorists do come in from that side to create violence in our territory particularly in Jammu and Kashmir. Not that the other states are devoid of terror, it is because of our intelligence agency that we are able to pick up the signs and foil a lot of incidents of violence," he said. "It is also important to incorporate technology while guarding the border. So the emphasis is now being given on intelligence, surveillance and reconnaissance called ISR," he added.

He also informed that the terrorist camp in Pakistan’s Balakot, which was attacked by the Indian Air Force in February to avenge the terror attack on CRPF personnel in Pulwama in Jammu and Kashmir, has been reactivated. According to General Rawat, the fact that the Jaish-e-Mohammad (JeM) camp in Balakot has been reactivated suggests that it was destroyed earlier.

The Army chief said that India would not repeat the actions carried out in the past. “We did surgical strikes and airstrikes, now let’s keep the enemy guessing,” he said.

INX Media received Rs 305 crore through FDI, there was no fraud: Chidambaram to Delhi HC