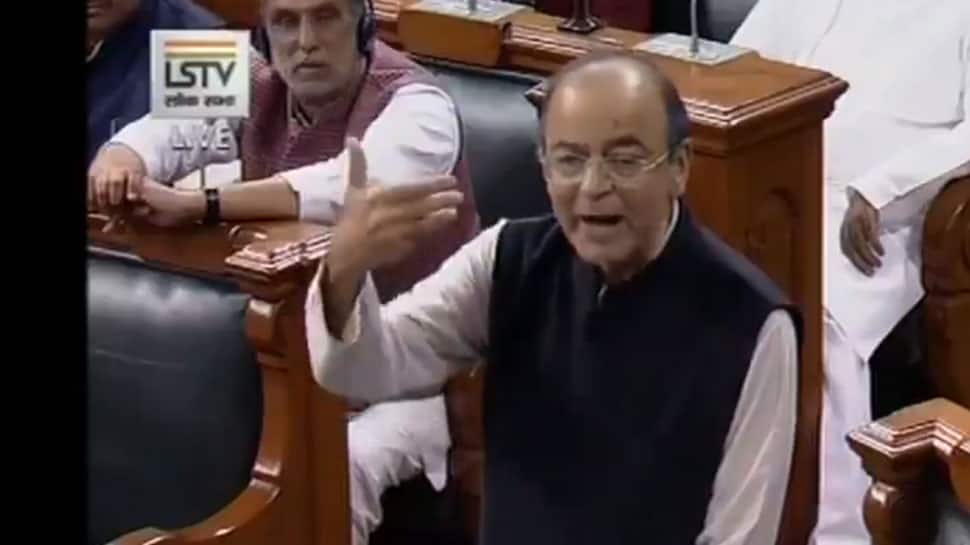 NEW DELHI: High drama was witnessed in the Parliament when the Opposition MPs led by the Congress president disrupted Finance Minister Arun Jaitley's speech on the controversial Rafale fight jets deal with France and pressed for a Joint Parliamentary Committee (JPC) probe into the mater.

The ruckus began shortly after FM Jaitley began with a point-to-point rebuttal of the Opposition's charge of corruption in the Rafale fighter jet deal.

The Congress chief sought to play a purported recording of a conversation of a Goa Minister on the Rafale deal as he accused Prime Minister Narendra Modi of bypassing procedures to award the contract to a private entity after agreeing to a three-time hike in the price per aircraft and reducing the number of planes to be bought.

Pandemonium broke out when Rahul Gandhi took out his mobile phone and sought the Speaker's permission to play the recorded conversation amidst stiff Opposition from the ruling benches, including Finance Minister Arun Jaitley who alleged that after concocting French President Emmanuel Macron on the issue of disclosing the price, the Congress president was now trying to play a conversation which he knew was false.

As high drama and din continued, Speaker Sumitra Mahajan asked Rahul Gandhi to authenticate the purported conversation and sternly told him not to play any recording.

"They are so afraid, I will not play the tape and if it pleases you but...," he said adding he would read from the taped conversation.

Jaitley interjected to say that Gandhi knew it was false and was refusing to authenticate it.

As the two sides got involved in heated exchanges, the Speaker adjourned the House briefly for five minutes.

When the House assembled again, the Congress MPs protested in the house and also flew paper planes targeting FM Jaitley, on which a stern warning was issued by the Speaker.

WATCH here the moment when Congress MPs threw paper planes towards FM Arun Jaitley while he was speaking during Rafale deal debate in Lok Sabha.

Later, Gurjeet Singh Aujla, Congress MP said, '' We threw the paper planes (in Lok Sabha during FM Arun Jaitley's statement) as the discussion was on Rafale, so talk about Rafale, but they were talking about Bofors, Agusta Westland and National Herald.''

It is to be noted that Rahul Gandhi had earlier rejected PM Narendra Modi's claim in an interview with ANI that there was no personal allegation against him on the Rafale deal, saying this is not true as the entire nation is asking him a direct question.

"He (Modi) spoke for 90 minutes in a ''staged interview'' but still did not answer questions on the Rafale issue," Rahul Gandhi said.