Union Civil Aviation Minister Jyotiraditya Scindia said, "PM Modi has always believed that India should lead the world. We must stop being followers and must adopt practice of being global leaders. New drone policy will create history in India`s ideology in 21st century." 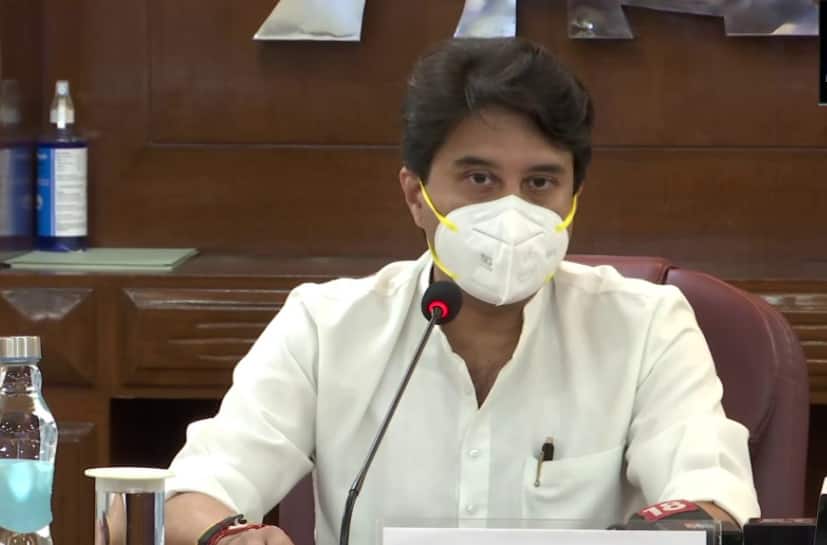 New Delhi: Union Civil Aviation Minister Jyotiraditya Scindia on Thursday (August 26) said the aim of the government is to make India a global drone hub by 2030, adding that drone application will be ensured in transportation, logistic, defence, mining, infrastructure sectors and more, which will generate job opportunities.

Speaking about the new Drone Rules 2021, Scindia said, "We are going to ensure drone application in transportation, logistic, defence, mining, infrastructure sectors and more. It will provide more jobs. Our aim is to make India a global drone hub by 2030."

Scindia today chaired a press conference to discuss the benefits and applications of the new Drone Rules 2021. Senior officials from the Ministry of Civil Aviation (MoCA) and the Airports Authority of India along with other important stakeholders were also present during the event.Centre on Thursday issued fresh norms for drones usage in the country.

He also appreciated Prime Minister Narendra Modi for his "far-sightedness" highlighting that the new rules create a balance between the country`s development and security."The drone rules create a balance between India`s development and security. This shows PM Modi`s far-sightedness and capability. Our drone rules are based on trust, self certification and non-inclusive monitoring," Scindia said."

In the new drone rules, instead of controlling and regulating, we are trusting controller and manufacturer," said Pradeep Singh Kharola, Secretary, Civil Aviation Ministry.

Kharol said, "A large number of safety and security features have been built-in. But at the same time, main thrust has been that this policy is based on philosophy of self-certification, self control and non-intrusive monitoring, be that as it may."

"Most important feature of this drone policy is that it seeks to promote manufacture and usage of drones. It's true that drone, may at times, pose security challenge. Even that issue, to the extent possible, has been addressed in this policy," Pradeep Kharola added.

About the future possibility of witnessing air taxis, he said, "I believe, there is a possibility that similar to taxis running on the road at present, we see taxis in the air, under the drone policy."

The Ministry of Civil Aviation in a release today informed, "Based on the feedback, the Government has decided to repeal the UAS Rules, 2021 and replace the same with the liberalised Drone Rules, 2021."

He took to social media and tweeted, “The new Drone Rules usher in a landmark moment for this sector in India. The rules are based on the premise of trust and self-certification. Approvals, compliance requirements and entry barriers have been significantly reduced.”

PM Modi further added, “The new Drone Rules will tremendously help start-ups and our youth working in this sector. It will open up new possibilities for innovation & business. It will help leverage India’s strengths in innovation, technology & engineering to make India a drone hub.”

The new Drone Rules will tremendously help start-ups and our youth working in this sector. It will open up new possibilities for innovation & business. It will help leverage India’s strengths in innovation, technology & engineering to make India a drone hub.

-Coverage of drones under Drone Rules, 2021 increased from 300 kg to 500 kg to include heavy payload-carrying drones and drone taxis.
-Number of forms/permissions reduced from 25 to 5.
-No security clearance required before any registration or licence issuance.
-Fees for permissions reduced to nominal levels.
-Maximum penalty under Drone Rules, 2021 reduced to INR 1 lakh. This shall, however, not apply to penalties in respect of violation of other laws.
-Interactive airspace map with green, yellow, and red zones will be displayed on the digital sky platform.
-Yellow zone reduced from 45 km to 12 km from the airport perimeter.
-No permission required for operating a drone in green zones and upto 200 feet in the area between 8 and 12 km from the airport perimeter.
-Online registration of all drones shall happen through the Digital Sky Platform.
-Easy process prescribed for transfer and deregistration of drones.
-An easy opportunity provided for regularisation of existing drones in the country.
-No pilot licence required for operating nano drones and micro drones for non-commercial use.
-Safety features like ‘No permission – no take-off’ (NPNT), real-time tracking beacon, geo-fencing etc. to be notified in future. A minimum six-month lead time will be provided for compliance.
-All drone training and examination to be carried out by an authorised drone school.  DGCA shall prescribe training requirements, oversee drone schools and provide pilot licences online.
-Type Certification of drones delegated to Quality Council of India and certification entities authorised by it.
-No requirement of type certificate, unique identification number, prior permission and remote pilot licence for R&D entities.
-Import of drones to be regulated by DGFT.
-Drone corridors will be developed for cargo deliveries.
-Unmanned Aircraft Systems Promotion Council to be set up to facilitate a business-friendly regulatory regime.