Government still hopeful unions will come with alternatives in next round of talks on January 15: Narendra Singh Tomar

New farm laws: The meeting, attended by Union ministers Narendra Singh Tomar and Piyush Goyal, witnessed a heated argument on the next date. 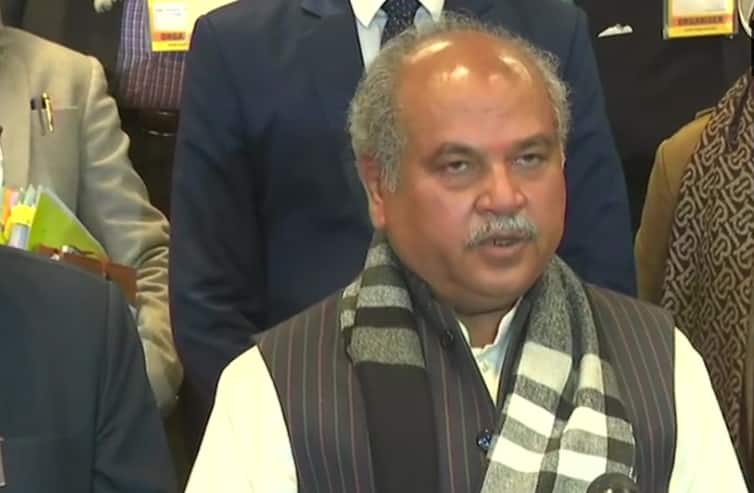 New Delhi: The eighth round of talks between the Centre and farmers` union leaders at Vigyan Bhawan here on Friday (January 8) remained inconclusive and it was decided that the next round of talks will be held on January 15. The farmers remained adamant on their demand to completely repeal the three farm laws.

The meeting, attended by Union ministers Narendra Singh Tomar and Piyush Goyal, witnessed a heated argument on the next date. Farmers are quoted by ANI as saying, "we are not coming here for taking dates" govt is not in favour of farmers.

Speaking to reporters after the meeting that lasted for a little over two hours, Agriculture Minister Narendra Singh Tomar said the government is still hopeful that union leaders will come with alternatives to discuss in the next round of talks on January 15.

He, however, virtually ruled out the repeal of the laws saying many other groups across the country are supporting these reforms. On whether the government made a proposal to farmers to join a pending case in Supreme Court on issues related to farmers' protest, Tomar said the government did not make any such suggestion but it is always committed to follow whatever is decided by the Supreme Court.

Tomar said, "Those supporting the protest are of the view that the laws are repealed and there are many others who support the laws. Govt is continuously talking to the unions who want these laws to be repealed. We also give the appointment to those supporting the laws, when they request us."

The next date has reportedly been decided after keeping in mind a scheduled hearing of the apex court on January 11 as the government feels the top court may look into the legality of the three laws, besides other issues related to farmers' protests.

Asked whether the government would consider any proposal for allowing states to decide whether to implement the laws or not, Tomar said no such proposal was made by any farmer leader in this regard, but if such a suggestion is made the government will take a call at that time.

After the meeting, union leader Joginder Singh Ugrahan said the meeting was inconclusive and it was unlikely that any resolution can happen in the next round of talks as well.

Joginder Singh said, "We do not want anything less than the repeal of laws," adding "Government is testing our strength, but we will not bow down. It seems we will have to spend Lohri and Baisakhi festivals here at protest sides."

Another union leader Hannan Mollah said farmers are ready to fight till death and going to court was not an option. He said the farmer unions will meet on January 11 to decide their next course of action.

Sticking to their key demand of the repeal of three farm laws to end their protest, farmer leaders told the government their "ghar wapsi" from protest sites on Delhi borders can happen only after "law wapsi" but the Centre insisted talks must be limited to contentious clauses and ruled out a complete withdrawal of Acts.

At the eighth round of negotiations with the 41-member representative group of protesting farmers, the government has asserted that these reforms have been welcomed by a large section of farmers in various states, and asked the unions to think about the interests of the entire country.

At the outset, Tomar appealed to unions for discussions on the laws, while farm leaders reiterated their demand that the new Acts must be withdrawn, sources said, adding that the agriculture minister stressed protecting the farmers' interest of the entire country.

Farmers have been protesting at different borders of the national capital since November 26 against the three newly enacted farm laws - Farmers` Produce Trade and Commerce (Promotion and Facilitation) Act, 2020, the Farmers (Empowerment and Protection) Agreement on Price Assurance and Farm Services Act, 2020, and the Essential Commodities (Amendment) Act, 2020.