Asked about Quad being referred to as an 'Asian NATO', Jaishankar said, "We call ourselves Quad and Quad is a platform where four countries have come to cooperate for their benefit and for the benefit of the world." 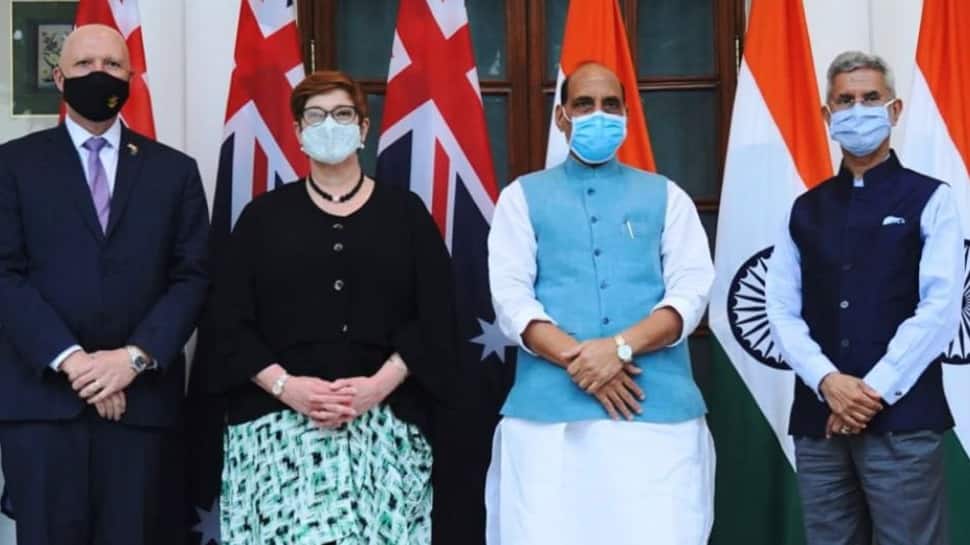 New Delhi: India and Australia on Saturday dismissed criticism that Quad was a sort of an 'Asian NATO' with External Affairs Minister S Jaishankar asserting that it is important not to "misrepresent" the reality.

At the India- Australia ministerial level 2+2 meeting today, I and Dr. Jaishankar had in-depth and wide ranging discussion with Minister Payne and Minister Dutton on bilateral and regional issues. pic.twitter.com/FP4R9YIfFf

Asked about Quad being referred to as an 'Asian NATO', Jaishankar said, "We call ourselves Quad and Quad is a platform where four countries have come to cooperate for their benefit and for the benefit of the world."

"I think a term like NATO is very much a cold war term, looking back. I think Quad looks in the future, it reflects globalisation, it reflects the compulsions of countries to work together," he said.

Jaishankar also pointed out that Quad was currently focussed on issues such as vaccines, supply chains, education and connectivity.

"I can't see any relationship between such issues and the NATO or any other kind of organisations like that. So I think it is important not to misrepresent what is the reality out there," he asserted.

Echoing similar views, Payne said as Australia and India have re-energised relations, there is also the opportunity to work through smaller groups like the Quad and other pieces of regional architecture like the East Asia Summit or the ASEAN regional forum.

"Quad members are champions of ASEAN centrality, we actively engage in that ASEAN architecture. We are committed to supporting the practical implementation of the ASEAN outlook on the Indo-Pacific," she said.

"We also say that we have a positive and practical agenda -- around vaccines, around climate, around critical technology also trying to address some of the dangerous misinformation that pervades the world experience in relation to the (Covid) pandemic," the minister said.

Referring to the Quad, she said the constructive engagement in a normal diplomatic network was overwhelmingly about contributing positively for that "open, inclusive and resilient region in which we all want to live".

Speaking at an event here, Payne on Friday had said the Quad has evolved "swiftly" and very "effectively" and that Australia commends India for taking a strong leadership role in the region.

In the first Quad summit in March, Prime Minister Narendra Modi, US President Joe Biden, Australian PM Scott Morrison and Japanese PM Yoshihide Suga vowed to strive for an Indo-Pacific region that is free, open, inclusive, healthy, anchored by democratic values, and unconstrained by coercion, in an apparent message to China.

Both China and Russia have been critical of Quad. While Beijing has been claiming that the alliance was aimed against it, Russian Foreign Minister Sergey Lavrov had called it an "Asian NATO" and criticised the grouping.