President Kovind said that Gandhi`s vision and action encompassed almost every facet of individual and collective life. "He showed us the path to communal unity, removal of untouchability, upliftment of women, education, sanitation, preserving the environment and water. Let us resolve to strengthen the legacy of Mahatma Gandhi," he added. 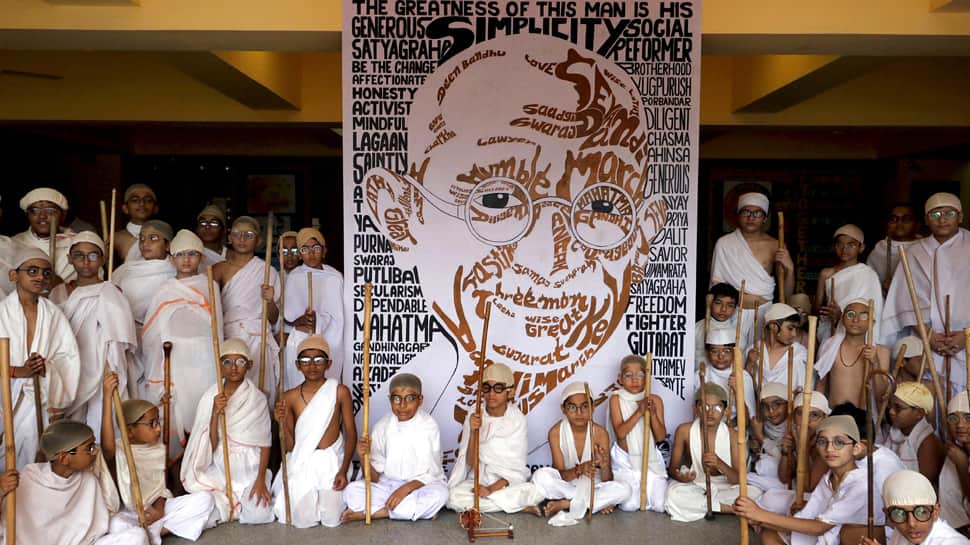 India on Wednesday will commemorate the 150th birth anniversary of Mahatma Gandhi and hold several programmes throughout the country to pay tribute to the Father of the Nation.

In his message, President Ram Nath Kovind said that Gandhi Jayanti is a special occasion for all of us to rededicate ourselves to the values of truth, non-violence, harmony, morality and simplicity. He added that "Satya, Ahimsa and Sarvodaya formed the bedrock of Mahatama Gandhi`s numerous messages to humanity. Gandhiji is a global icon revered across continents. United Nations has marked Gandhi Jayanti as `The International Day of Non-Violence`. Gandhian values and many of his methods remain relevant not only for India but for the entire world."

President Kovind said that Gandhi`s vision and action encompassed almost every facet of individual and collective life. "He showed us the path to communal unity, removal of untouchability, upliftment of women, education, sanitation, preserving the environment and water. Let us resolve to strengthen the legacy of Mahatma Gandhi," he added.

Prime Minister Narendra Modi will start the day with a visit to Rajghat in the national capital at 7.20 am, the resting place of the father of the nation. It will be then followed by his visit to Vijayghat at 7.50 am, the resting place of former prime minister Lal Bahadur Shastri, who also shares his birthday with Gandhi. PM Modi will next go to Parliament at 10.30 am where he will pay floral tributes to both leaders.

Later in the evening, he will fly off to Ahmedabad where BJP leaders and the state cabinet members will welcome him. A programme will be held at the airport where he will address a public meeting. He will then visit the Sabarmati Ashram where he will garland the Gandhi statue. The Prime Minister, who launched the `Swachh Bharat` campaign in 2014, in remembrance of Gandhi, will take part in an event for cleanliness there. The `Swachh Bharat` campaign was launched with the goal to make India open-defecation free, with Gandhi`s iconic spectacles serving as the campaign`s logo.

There will be a programme on the riverfront at 7 pm where thousands of sarpanches from all over Gujarat will be present. Around 8.30 pm, PM Modi will visit the Gmdc ground in Ahmedabad to participate in the Navratri festival. He will depart for Delhi at around 9.30 pm.

BJP President and Home Minister Amit Shah will address a small gathering in Delhi`s Shalimar Bagh on the occasion. Shah will also flag off a `Gandhi Sankalp Yatra` from the Ramlila Maidan.

Ever since the Modi government first came to power in 2014, October 2 is celebrated with much fanfare.

All relief efforts being made for people affected by Patna floods: CM Nitish Kumar