At least 41 dead as storm wreaks havoc in 4 states, leaves behind trail of destruction

Shortly after the drastic weather change, the Met Department said that the weather will remain adverse for two to three days and thunderstorm will continue for the next 48 to 72 hours. 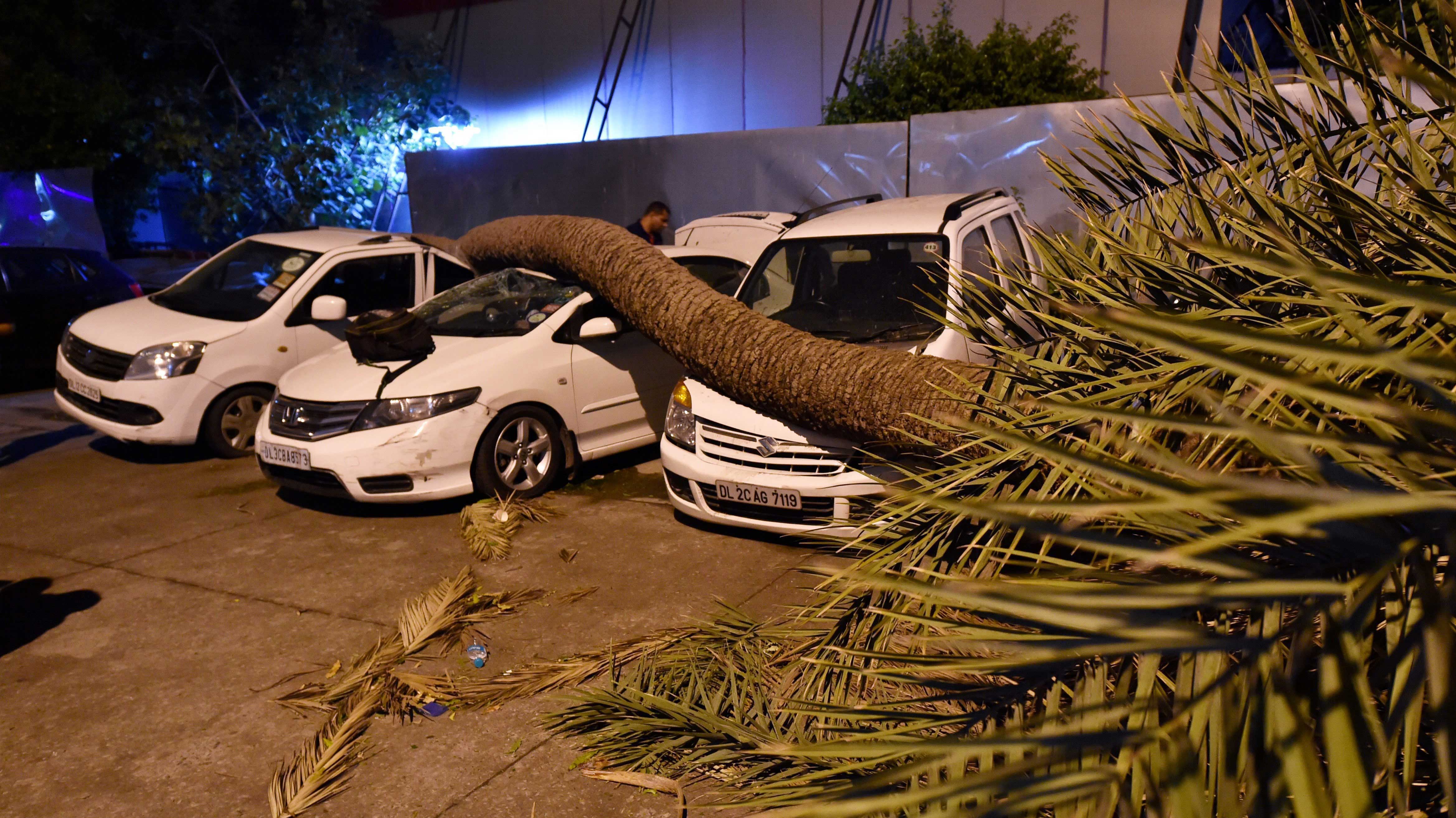 NEW DELHI: At least 41 people including children lost their lives on Sunday following thunderstorms accompanied by gusty winds that hit parts of north, east and south India. A squall and sudden dust storm with a wind speed of up to 109 kmph accompanied by light rain hit Delhi on Sunday afternoon. The sky turned cloudy around 4:30 pm and gusty winds swept the city.

Shortly after the drastic weather change, the Met Department said that the weather will remain adverse for two to three days and thunderstorm will continue for the next 48 to 72 hours.

"There is a circulation of a western disturbance in North West India. We had forecasted that the weather will be adverse for 2 to 3 days. This thunderstorm will continue for the next 48 to 72 hours," Indian Meteorological Department (IMD) Scientist Charan Singh said.

The flight movements at Delhi's Indira Gandhi International (IGI) airport were also put on hold, due to the thunderstorm. As many as 70 incoming flights were diverted at the airport. According to the official, several inbound flights to Delhi were diverted to Amritsar, Lucknow, Jaipur, Ahmedabad, Jammu and Dehradun.

The Metro services in the national capital was also slapped due to the bad weather conditions. Thousands of commuters were stuck on the winding and busy Blue Line, which links Dwarka in northwest Delhi to Noida and Vaishali in Uttar Pradesh, for almost 45 minutes. The services were later resumed and the trains plied at halting speed.

The rains and storm brought down trees and tree branches in some areas and led to traffic snarls, forcing two-wheeler drivers to take shelter under bridges and flyovers. Motorists switched on headlights to find their way in the enveloping darkness.

Although the storm accompanied by cold winds came as a relief to many after a sweltering day, for some it became fatal. People across the country including Uttar Pradesh, Andhra Pradesh and West Bengal lost their lives following the thunderstorm and rain.

Prime Minister Narendra Modi, meanwhile, condoled the deaths occurred due to the devastating storm. "Saddened by the loss of lives due to storms in some parts of the country. Condolences to the bereaved families. I pray for the speedy recovery of those injured.Asked officials to provide all possible assistance to those affected," he tweeted.

18 people died and 34 others were injured in a thunderstorm in Uttar Pradesh. At least 10 huts caught fire due to lightning at Sanota village in UP's Bulandshahr. Principal secretary (Information) Awanish Awasthi told PTI, "Four deaths have been reported from Kasganj, while two persons died in Bulandshahr. Apart from this, one death each has been reported from Kannauj, Aligarh, Sambhal, Ghaziabad and Noida."

12 people including four children lost their lives while 15 others got injured in West Bengal in lightning strike amid heavy rain following a thunderstorm that lashed the state leaving behind a trail of destruction. Five deaths were reported from Howrah district, while two deaths each from West Midnapore, North 24-Parganas and Nadia districts and one from Murshidabad district.

Andhra Pradesh State Disaster Management Authority confirmed the death of seven people in Srikakulam, one in Vizianagaram and one in Kadapa district of Andhra Pradesh due to a thunderstorm and lightning strikes. Various parts of the southern state witnessed rain, accompanied by gales.

The strong winds knocked down nearly 200 trees in the city. Incidents of wall collapse were reported from Najafgarh, Transit Camp, Nehru Place, Mohan Garden in Uttam Nagar and Raj Nagar in Palam, said a senior officer of the Delhi Fire Service.

A man was crushed to death in a wall collapse, while a woman was killed when a tree uprooted and fell on her, the police said. Traffic in many areas moved at a snail's pace due to the reduced visibility. The inclement weather interrupted the launch of a 140 kWp rooftop solar plant at IP Extension attended by Chief Minister Arvind Kejriwal.

The devastation comes more than 10 days after storms hit UP, Rajasthan, Telangana, Uttarakhand and Punjab, killing 134 people and injuring over 400. UP was the worst affected, accounting for 80 deaths, most of them in Agra district in the western part of the state.

Subsequently, on May 9, several parts of Uttar Pradesh were struck by a severe storm that left 18 dead and 27 others injured.