PM Modi on Saturday said that ''new India is a leader, fearless and decisive.'' 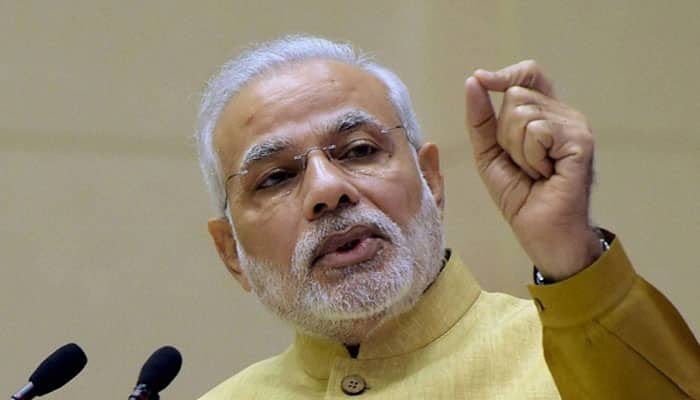 NEW DELHI: Prime Minister Narendra Modi on Saturday asserted that India has changed under the NDA government and can no longer be cowed down by anyone in the world.

''New India is a leader, fearless and decisive. Unlike in the past, now no one can dare threaten India,'' PM Narendra Modi said.

PM Modi made these remarks while speaking at an event organised by a leading private TV news channel.

Slamming his political rivals who have raised doubts over the NDA government's foreign policy and called it ''week'', PM Modi said, ''events in last few days would have displayed what is the influence of India's foreign policy.''

Accusing the Opposition of playing into Pakistan`s hands by making statements lowering the morale of the Indian armed forces, the PM said that ''some anti-national elements both within and outside India have created a fear psychosis.''

PM continued to attack the Opposition leaders for their "anti-Modi" attitude, which, he alleged, has made them ''anti-India".

''Some people while opposing Modi, have turned against the country,'' the PM said.

Giving a piece of advice to his detractors, the Prime Minister said, 'You are free to criticise the government but don't compromise national interests.''

''Criticise me, but make sure your anti-Modi tirade does not benefit people like Hafiz Saeed and terrorism,'' PM Modi said.

"It is the misfortune of the country that at a time when the whole world is seeking answers from Pakistan, they (opposition parties) are making statements that undermine the morale of the security forces of the country,'' the PM said.

While asking his political detractors ''not to weaken the country and strengthen its enemies'', PM Modi said, ''When the world is standing behind India's fight against terror, some parties are questioning it.''

"The Pakistan Parliament is quoting these irresponsible statements to counter us. This is unfortunate. Their penchant to oppose Modi has turned them (opposition) into anti-India," PM Modi said.

The remarks from the Prime Minister came in the wake of 21 opposition parties unanimously accusing PM Modi and the NDA government's "blatant politicisation" of armed forces` sacrifices.

Coming down hard on the previous Congress-led governments, the PM said, ''those who ruled the nation for so many years have many defence scams in their era.''

The PM sought to know from the audience, ''who is every middle-man close to?''

Our 55 months vs 55 years of others were contrasting in governance. Previous governments had a ''token approach'', we have a ''total approach,'' the PM said.

The PM also said that time had come for a "total transformation" where fruits of development must reach "each and every citizen".

The IAF pilot was captured on February 27 by Pakistan following a dogfight between the two air forces in which his MIG-21 was shot down.

Hoping to give a hero's welcome to Wing Commander Varthaman, thousands of Indians gathered on the border carrying the tricolour and garlands since morning.

After much delay, he finally emerged around 9.15 PM at the Wagah check-post on the Pakistani side, accompanied by Pakistani Rangers, the Indian air attache posted in the High Commission in Islamabad.

He was wearing civilian clothes - a dark jacket and khaki trousers, walking proudly toward the gates that separated his captors' country from his homeland.

"Wing Commander Abhinandan has just been handed over to us. He will be taken now for a detailed medical checkup. This check-up is mandatory as he had to eject from a jet which would have put his entire body under stress," Vice Chief Marshal R G K Kapoor told reporters in a brief statement in Attari, near Amritsar, on the other side of Wagah.

Tensions between India and Pakistan flared up after a suicide bomber killed 40 CRPF personnel in Kashmir on February 14 by Pakistan-based terror group Jaish-e-Mohammad.

Amid mounting outrage, Indian Air Force carried out a counter-terror operation, hitting what it said was JeM training camp in Balakot, deep inside Pakistan on February 26. The next day, Pakistan retaliated with a large air formation, comprising 24 fighter jets, including F-16s.

Varthaman was in one of the eight MIG-21s that took on the invader and shot down an F-16, according to officials.

During the dogfight, his plane was hit and he ejected and landed in PoK, where he was taken into custody by the Pakistani army.