Irani claimed that the Sohrabuddin case was politically motivated. 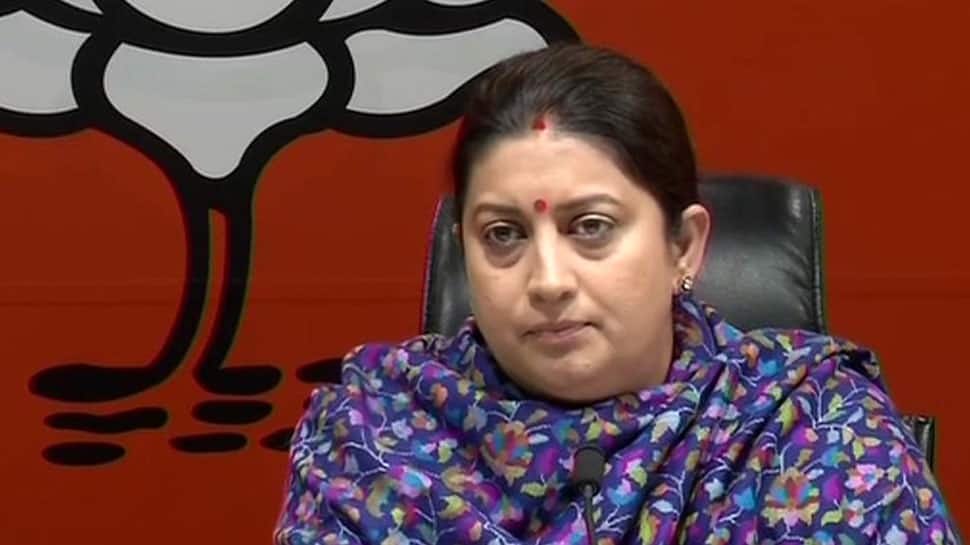 NEW DELHI: In a blistering attack on the Congress party, the ruling BJP on Tuesday alleged that the previous UPA government misused the Central Bureau of Investigation (CBI) to frame Amit Shah in the Sohrabuddin Shaikh encounter case.

Addressing a press conference in the national capital, Union Textiles Minister Smriti Irani said that there was a clear conspiracy by the Congress government and the party's former president Sonia Gandhi to destroy the political career of Amit Shah, who is now BJP national president.

''Congress misused the CBI in 2010 to frame Amit Shah, who is now BJP chief. There’s clear proof of a political conspiracy by Congress against him. We want to highlight to the nation that Congress will not spare anyone who comes in their pursuit of power,'' Irani told reporters.

Union Minister & BJP leader Smriti Irani: Congress misused the CBI in 2010 to frame BJP Pres Amit Shah. There’s clear proof of political conspiracy by Congress against him. We want to highlight to the nation that Congress will not spare anyone who comes in their pursuit of power. pic.twitter.com/v2tW8DnzlG

Irani claimed that the Sohrabuddin case was ''politically motivated.''

"The entire investigation was carried out according to a set script to achieve certain goals. Truth has finally won in a case that was nothing but a conspiracy by Congress," the Union Textiles Minister said.

Irani also accused the CBI of creating evidence for a manufactured probe in the case under pressure from the Congress party, which was in power in 2010.

Thanking the honourable court, which recently gave a clean chit to the BJP president in the case, Irani said, ''Despite Congress's political conspiracy to destroy Amit Shah, the courts have cleared the BJP chief of all charges levelled against him. It was a conspiracy by Congress."

Quoting the recent CBI court judgement, which was delivered a week ago by the special CBI court, Irani said, "The judgement by the Special CBI judge clearly said that the CBI was more concerned about establishing a particular pre-conceived and pre-meditated theory, rather than finding out the truth to implicate political leaders."

On December 21, the special CBI court acquitted all the 22 accused, saying a conspiracy could not be proven.

"I have no hesitation in recording that a premier investigating agency like CBI had before it a premeditated theory and a script intended to anyhow implicate political leaders. And the agency thereafter merely did what was required to reach that goal rather than conducting an investigation in accordance with law," the judgement read.

All 22 accused in the alleged fake encounter killings of gangster Sohrabuddin Shaikh, his wife Kausar Bi and his aide Tulsi Prajapati were acquitted last month by a special CBI court because of insufficient evidence, even as it expressed sorrow over the loss of “three lives.”

The Union Minister further said after the court's judgement, years of fake propaganda by Congress against Amit Shah crumbled.

All the accused, who were mostly police officials from Gujarat and Rajasthan, were out on bail during the year-long trial.

The 13-year-old case saw several twists and turns, including 92 prosecution witnesses turning hostile. At one point, BJP president Amit Shah was also arrested briefly in 2010 in the case before being discharged in December 2014.

The three victims, who were returning to Sangli in Maharashtra from Hyderabad in a bus, were taken into custody by a police team on November 22-23, 2005 night. The couple were taken in one vehicle and Prajapati in another.

CBI, the prosecuting agency, said Shaikh was killed on November 26, 2005, allegedly by a joint team comprising Gujarat and Rajasthan police, and Kausar Bi three days later. Prajapati, who was lodged in Udaipur central jail, was killed in an encounter on the Gujarat-Rajasthan border on December 27, 2006.

Of the 22 accused, 21 are junior police officers from Gujarat and Rajasthan, who, the CBI said, were part of the teams that abducted the three and later killed them in staged encounters.

The other accused was the owner of the farmhouse in Gujarat where Shaikh and Kausar Bi were illegally detained before being killed.

The CBI had charged 38 persons, including Amit Shah, who was then Gujarat home minister, Gulabchand Kataria, the then Rajasthan home minister, and senior IPS officers like D G Vanzara and P C Pande. The prosecution had examined 210 witnesses, of which 92 turned hostile.

Shah was arrested in the case in July 2010, but released on bail by Gujarat High Court in October 2010. He was discharged by CBI court in December 2014.

Sixteen people, including Shah, Kataria, Vanzara and Pande, were earlier discharged by the CBI court due to lack of evidence.