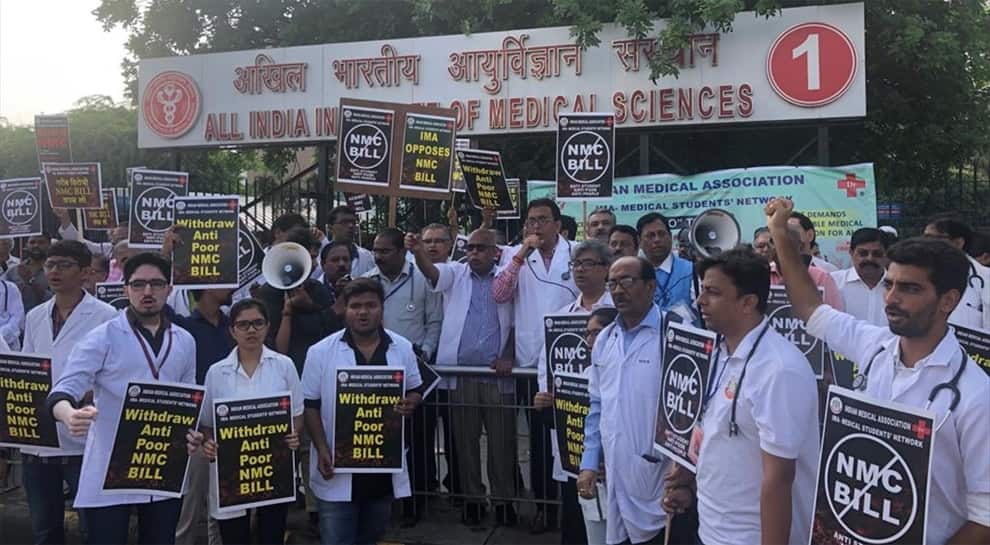 Doctors staging a demonstration against the NMC Bill at All India Institute of Medical Sciences (AIIMS), New Delhi. (IANS Photo)
Share:
Written By:

Amid widespread protests from the medical community, the Lok Sabha on Monday passed a National Medical Commission (NMC) Bill. While passing the Bill, Health Minister Harsh Vardhan called it one of the greatest reforms ushered in by the Modi government.

The Centre has termed the NMC Bill progressive legislation which will help meet challenges in the medical profession. Here's a quick look at the top features of the Bill:

What is the NMC Bill?

1. The NMC Bill repealed the Indian Medical Council Act, 1956, which approved the constitution of the Medical Council of India (MCI). The MCI regulated the standards of medical education, medical college admission, oversaw the courses or number of seats and looked after the registration of doctors, etc.

2. In place of the Medical Council of India (MCI), the Bill proposes setting up of the National Medical Commission (NMC). The NMC will:

3) Centre claims the NMC Bill is pro-poor will help the economically weaker sections to pursue medical courses on merit. It will also cut down the existing corruption in the medical education sector.

4) The Bill also proposes a common final-year MBBS examination, known as National Exit Test (NEXT), for admission to post-graduate medical courses and for obtaining a license to practice medicine. It will also serve as a screening test for foreign medical graduates.

5) Going forward, the National Eligibility-cum-Entrance Test (NEET) common counselling and NEXT would be applicable to for admission to Institutes of National Importance such as AIIMS. This has been introduced to achieve a common standard in medical education in the country.

6) The bill also introduces the Medical Assessment and Rating Board (MARB) which will conduct an assessment of the medical colleges and develop a system of ranking the institutes.  MARB will grant permission for new medical colleges, starting PG course and increase of seats based on the standards set by the UG and PG boards.

Why doctors are opposing the NMC Bill?

One of the primary concerns over the NMC Bill is that it will give a boost to quacks and quackery practitioners in rural areas. Doctors claim, under Section 32 of the NMC bill, nearly 3.5 lakh community health providers – mostly quacks-- would be legalised to prescribe drugs.

The doctors' fraternity also termed the Bill anti-poor and anti-public since making NEXT mandatory before NEET can reduce the chances of people from economically weaker section entering the medical sector.

"The authorities have dismissed the Medical Council of India (MCI) which was a recommendatory body for the medical entrance test. Several poor persons also have aspirations to become a doctor. Under the NMC bill, National Exit Test (NEXT) is going to be mandatory before the National Eligibility Test (NEET). This will just create more barriers for a youngster to become a doctor," Dr Rajendra Sharma, National President-elect of IMA said.

"The merit seats have also reduced in the wake of the increase in management or NRI quota seats," he added.

Doctors across the country went on a 24-hour medical strike from 6 am on Wednesday, withdrawing all non-essential services. The Indian Medical Association (IMA) has called for the strike in protest against the passage of National Medical Commission (NMC) Bill, 2019, in the Lok Sabha.