Khan was critically injured last Wednesday during a terrror attack in Anantnag. The forty-year-old was rushed to Delhi for treatment after his condition deteriorated but he breathed his last on Sunday. 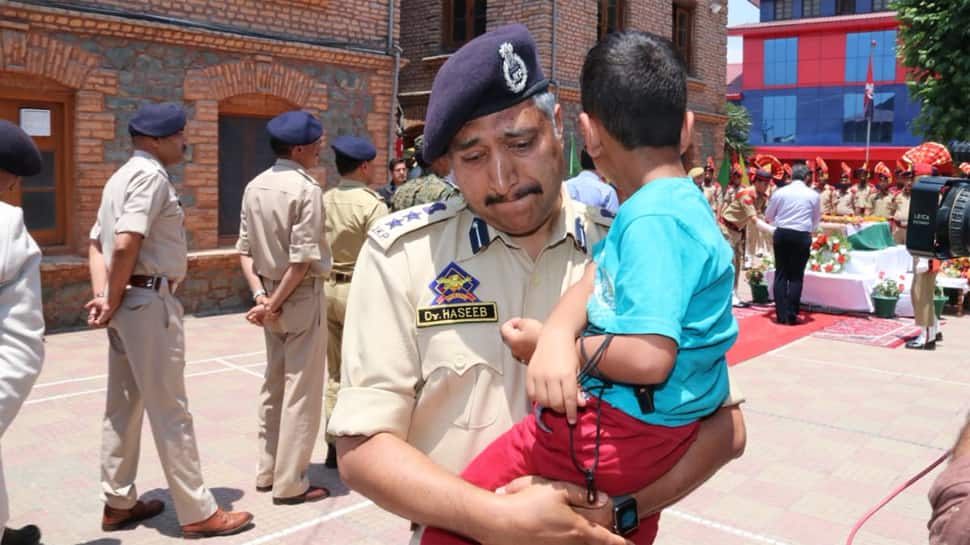 SRINAGAR: At the wreath laying ceremony of inspector Arshad Khan, who was martyred in Anantnag terror attack, the images of his son being taken to pay his last respects moved many to tears. In photos shared by Jammu and Kashmir Police, Senior Superintendent of Police (SSP) Srinagar Haseeb Mughal can be seen breaking down as he carried the martyred inspector's 4-year-old son Uhbaan in his arms. Uhbaan also gave the last salute to his father before he was taken to his home in the civil lines area near Karan Nagar.

Khan was critically injured last Wednesday during a terrror attack in Anantnag. The forty-year-old was rushed to Delhi for treatment after his condition deteriorated but he breathed his last on Sunday.

The son of Martyr #ArshadKhan in the lap of SSP Srinagar Dr.M.Haseeb Mughal JKPS during the wreath laying ceremony at District Police Lines Srinagar. pic.twitter.com/EqGApa82Rh

Khan was posted as the Station House Officer (SHO) in Sadar police station in Anantnag. He is survived by his wife, two sons, parents and a younger brother. He belonged to Srinagar city and had been recruited in state police in 2002.

At the wreath laying ceremont, the bugler playing the 'last post' and guard calling for 'shok salami shastra' (reversing of arms in honour of fallen soldiers). The police band was playing 'Wattan ki raah mein wattan ke naujaan shaeed ho (many youths have sacrificed their lives for nation)', a song from 'Shaheed', the 1948 movie starring Dilip Kumar.

Wreath laying ceremony of the Martyr #ArshadKhan was held at District Police Lines Srinagar which was attended by Advisors to Hon'ble Governor Senior Civil,Army,CAPF and Police officers family members of the Martyr and colleagues. pic.twitter.com/eNwo1MRxlB

While Khan's elser son Uhbaan was at the ceremony, his younger son Daamin, who is just 18-month old, was home.

Hundreds of people gathered at Khan's house to have a last glance of the fallen police officer.

Born to Mushtaq Ahmad Khan and Mehbooba Begum in Balgardan Srinagar, Khan was appointed as Sub-Inspector in Jammu and Kashmir Police in 2002 and served in various important capacities. During the 2016 agitation following the death of Burhan Wani, the poster boy of Hizbul Mujahideen, Khan, who was then posted as Station House Officer of Bijbehara, single-handedly cleared the highway and ensured that there was no traffic restriction.