Heated exchanges lead to adjournment of UP Assembly for 55 minutes

The Uttar Pradesh Legislative Assembly today witnessed heated exchanges between the BSP and some members on the treasury benches, leading to adjournment of the House for nearly 55 minutes. 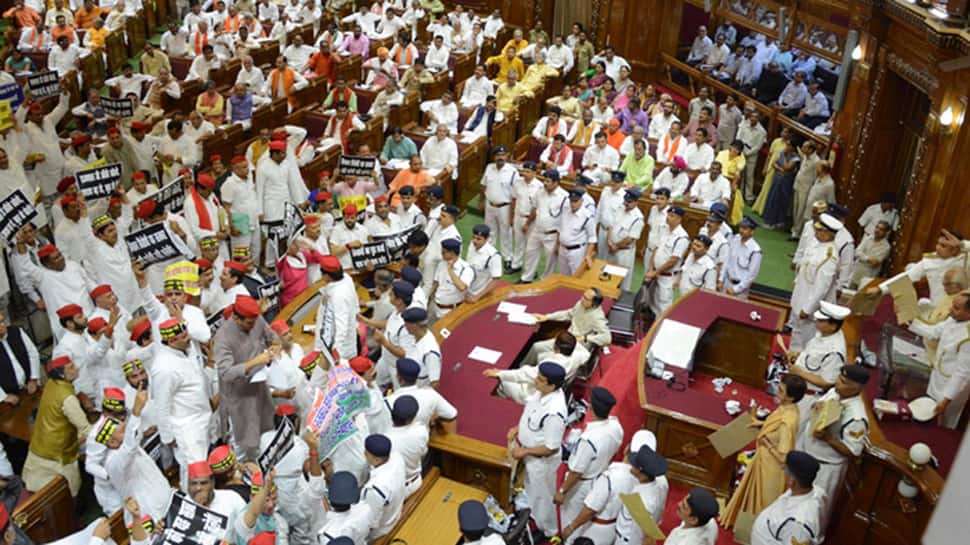 LUCKNOW:  The Uttar Pradesh Legislative Assembly today witnessed heated exchanges between the BSP and some members on the treasury benches, leading to adjournment of the House for nearly 55 minutes.

Certain references made by the BJP's Dal Bahadur Kori, who was earlier with the BSP, about the BSP and its leader during the Motion of Thanks prompted the party members, led by Lalji Verma and Sukhdev Rajbhar, to raise objections.

Responding to the objections, Minister for Labour and Employment Swami Prasad Maurya, who was also in the BSP and had quit after levelling serious allegations against party president Mayawati, came to the defence of Kori, saying that he had only expressed what he went through when he was in that party.

This led to heated exchanges between the BSP members and Maurya.

With the BSP pressing that they would settle for nothing less than Kori expressing regret over his taking names in the House, Maurya said no names had been taken and objectionable portions could be taken out.

As the tiff continued, Speaker Hriday Narain Dixit adjourned the House for 55 minutes in phases.

When the House reassembled, Kori said it was because of the BJP that the BSP formed its government thrice in the state and he also withdrew his words that were objected to.

Uttar Pradesh has been riot-free in the past one year, claims police