ALARMING: Who is 'Mitthu Mian' and why do Hindus in Pakistan fear him?

Human rights activists and Hindu groups in Pakistan have condemned the growing incidents of kidnapping of Hindu girls and their forced conversion to Islam. 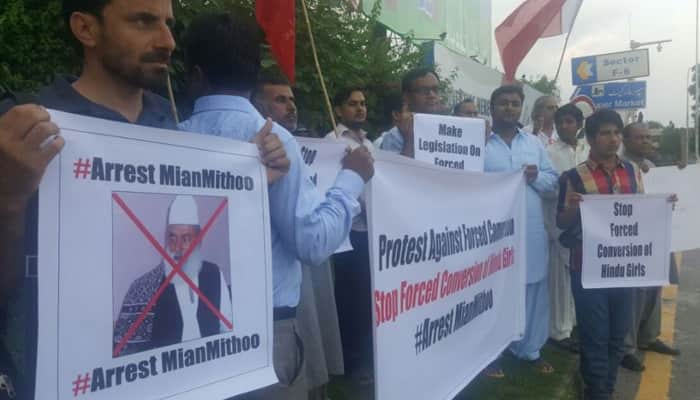 Islamabad: The minorities in Pakistan continue live in a state of fear and there have been several instances of teenage girls from Hindu families being kidnapped, forced to marry Muslim men and embrace Islam against their wishes in the recent past.

Human rights activists and Hindu groups in Pakistan have condemned the growing incidents of kidnapping of Hindu girls and their forced conversion to Islam.

Hundreds of activists assembled at Lahore's Faisal Square, in Karachi and Islamabad recently to protest against Mian Abdul Haq or Mitthu Mian - a politician and Muslim cleric, who is reportedly behind the alleged conversions.

Besides several Pakistani cities, protests were held in Toronto, New York and Houston against Haq, who has now become a symbol of terror among Hindu families.

He's a symbol of forced conversions … and Hindus from that area, they cannot even dare to utter a single word against him," said activist Kapil Dev, who used social media to initiate the push to demonstrate.

Mian Mithu belongs to an influential family in Pakistan's Sindh province, which is home to most Hindus who live in Pakistan.

The country's Hindu community has long alleged that he provides protection to those who kidnap Hindu girls, often under age 18, and forcefully converts them to Islam before he marries them off to their kidnappers.

These protests have come in the wake of several reports of attacks on Hindus in Karachi over past weeks. In one case a Hindu boy was murdered and a doctor was shot on August 6.

Mithu was also targeted in a case several years ago when the family of a Hindu girl, Rinkle Kumari, filed a petition in court alleging he supported her abduction.

The court decided, after hearing Kumari's statement, to send her with her husband, but her family alleged that Mithu used strong-arm tactics and political influence during the legal process to influence the outcome.

Ramesh Kumar Vankwani, a Member of National Assembly of Pakistan (PML-Nawaj) and the President of the Pakistani Hindu Council, was quoted as saying, "Forced conversion, particularly of Hindu girls to Islam, is one of the biggest problems and is one of the reasons for Hindus leaving Pakistan."

Hindus are demanding a change in the law and a mechanism for conversion that could help determine free will, he added.