Combing operation at IAF base over but alert in Pathankot, Gurdaspur continues

The operation to ensure that no terrorist was hiding was carried out jointly by Army, NSG and IAF's Garud commandos. 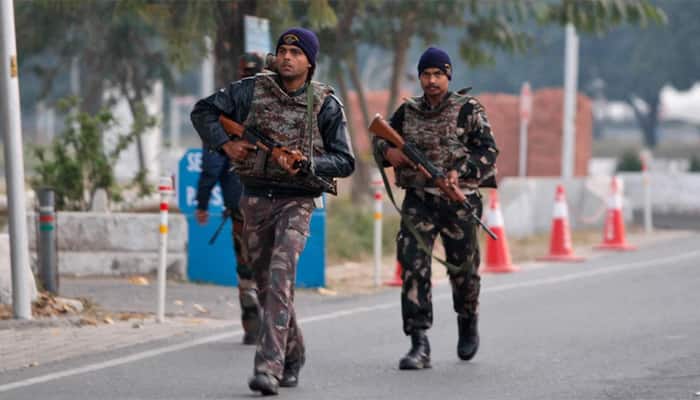 Pathankot: The massive combing operation at the sprawling Air Force station here ended on Friday, seven days after six terrorists struck, even as the districts of Pathankot and Gurdaspur remained on high alert in the wake of reported sighting of two men in army fatigues two days back.

"The combing operation at the Air Force station is over," a senior IAF official said, adding the entire area has been sanitised.

The sanitisation operation had been going on for the last three days ever since the six terrorists were gunned down.

The operation to ensure that no terrorist was hiding was carried out jointly by Army, NSG and IAF's Garud commandos.

The official said the IAF was "sharing and supporting" the NIA with the inputs.

The NIA has investigated the personnel of Defence Services Corps (DSC) in connection with the terror attack.

However, Pathankot and Gurdaspur are still on high alert in the wake of claims by locals in a village that they had seen two men in army fatigues moving in a suspicious manner on Wednesday.

Army and police, including the SWAT commandos, are carrying out search and combing operations in these two districts, particularly near the Tibri Cantonment area of Gurdaspur, where the suspected terrorists are believed to have been sighted.

Pathankot SSP R K Bakshi said all vehicles and individuals in Pathankot and nearby villages and towns are being thoroughly checked as a precautionary measure.

"We are not taking any chances," he said today.

Army has installed flood lights and police is conducting door-to-door searches to flush out the suspected terrorists, they said.

Punjab police has pressed into service the SWAT and dog squads are also assisting in the combing operation, officials said.

DDCA inquiry commission in accordance with law, only court can stop it, says Arvind Kejriwal