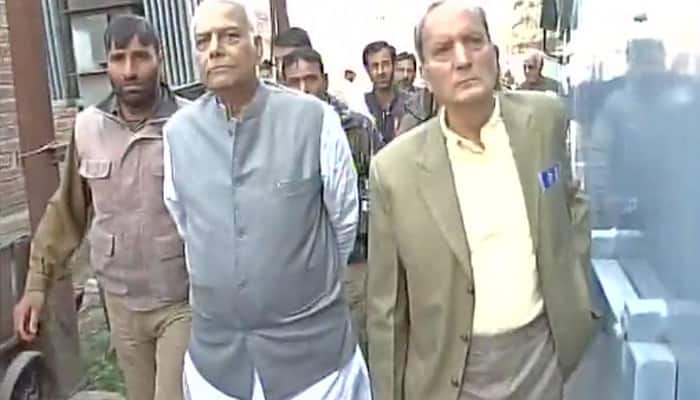 Srinagar: A five-member delegation led by senior BJP leader Yashwant Sinha on Tuesday met separatist leader Syed Ali Shah Geelani at his residence here -- in a fresh bid at breaking a logjam after more than three months of deadly unrest in the Kashmir Valley.

The team, which includes former bureaucrat Wajahat Habibullah, who has served in Jammu and Kashmir, ex-Air Vice Marshal Kapil Kak, journalist Bharat Bhushan and activist Sushobha Barve landed in Srinagar and straight away drove to Geelani`s residence in Hyderpora.

Interestingly, Geelani, who heads the hardline faction of separatist Hurriyat Conference, agreed to meet and talk to the Sinha-led delegation. The delegation members were seen entering the highly fortified house where Geelani has been kept under detention for over three months.

The octogenarian separatist had on September 4 shut the door on Communist Party of India-Marxist General Secretary Sitaram Yechury and other non-BJP MPs who were part of an all-party delegation on a visit to Kashmir.

And after two months of detention at a guest-house-turned-jail in Srinagar, the Mirwaiz is now under house arrest at his upscale Nigeen residence. Malik has also been moved from jail to a Srinagar hospital after his health deteriorated.

Sinha confirmed to IANS that he and other "people of goodwill" will try to "meet all" during their visit to the valley that began on Tuesday.

"We came here for humanity. Our motto is to share the grievances and pain (of Kashmiri people). I hope the state of unrest will be resolved soon," Sinha said.

Talking to reporters, the former BJP minister hinted that it was an independent initiative and that they were "not here as a part of any delegation".

The fresh bid to break ice between separatist groups and the government comes after 108 days of unrest and shutdown that have disrupted normal life in the Kashmir Valley since the July 8 killing of Hizbul Mujahideen commander Burhan Wani.

At least 92 persons were killed and over 12,000 injured in clashes between protesters and security forces.

Police have arrested over 7,000 suspected ring leaders of stone throwers. Some have been let off.

Sinha and his team are also expected to meet civil society and trade groups including the Kashmir Economic Alliance (KEA) and the Kashmir Centre for Social and Developmental Studies (KCSDS).

They will call on Chief Minister Mehbooba Mufti and Governor NN Vohra.