Covering the 2,100 nautical miles voyage from Goa to here, through rough seas whipped up by the Southwest Monsoon, in 20 days, this was the first voyage by an all-women crew on any Indian Navy vessel. 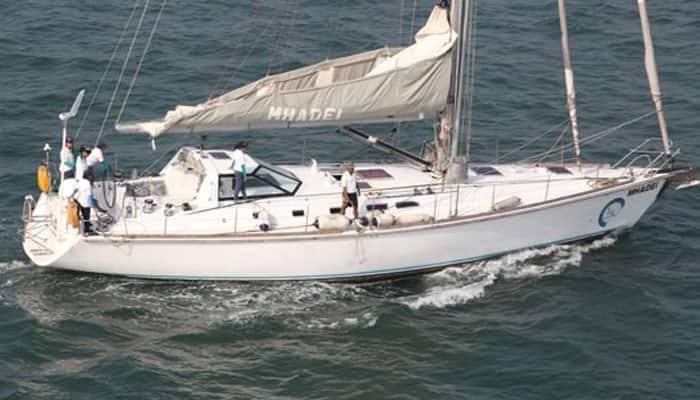 Covering the 2,100 nautical miles voyage from Goa to here, through rough seas whipped up by the Southwest Monsoon, in 20 days, this was the first voyage by an all-women crew on any Indian Navy vessel.

The vessel was welcomed by Mauritian Coast Guard vessel Retriever outside Port Louis harbour and escorted to her berth, where the acting Indian High Commissioner, Commandant of National Coast Guard and other dignitaries and invitees were present.

Ten Mauritian women police officers embarked on INSV Mhadei around 10 miles outside the harbor and sailed into port along with the Indian women crew.

During their 10-day long sojourn in Mauritius, the Indian woman sailors will call on President Ameenah Gurib, Minister for Gender Equality and Child Development, and other officials.

The ship will be kept open for visitors and schoolchildren, undertake local day sorties for select groups of people before embarking on its return voyage on June 24 to Goa, where it is expected to arrive early next month.

The Goa-Mauritius voyage in the extreme weather conditions is a build-up to the planned attempt by the all-women crew to circumnavigate the globe in 2017.

"This is a huge step towards the circumnavigation next year," a naval spokesman said.

"The timing of the voyage was chosen to expose the crew to rough weather that they are likely to encounter during their attempt to circumnavigate the Globe in 2017."

The wood-core and fiberglass sandwich hulled ship has two mainsails, two Genoa's, a stay-sail, one try-sail and two gennakers, is equipped with satellite communications and electronic navigation systems.

INSV Mhadei also created history earlier when Commander Dilip Donde sailed it on a circumnavigation voyage in 2009-2010 while in 2012, Lt. Cdr. Abhilash Tomy completed a solo, unassisted non-stop circumnavigation under sail, making him the first Indian, second Asian and 79th person in the world to achieve the feat covering 23,100 nautical miles (42,781 km).

Donde has also trained this crew.

The vessel on which the team would go around the globe is presently under-construction in Goa. The yet-to-be-named boat is expected to be delivered to the Navy by February 2017.