The Torana Gate is being dubbed as a cornerstone of the friendship between India and Malaysia. 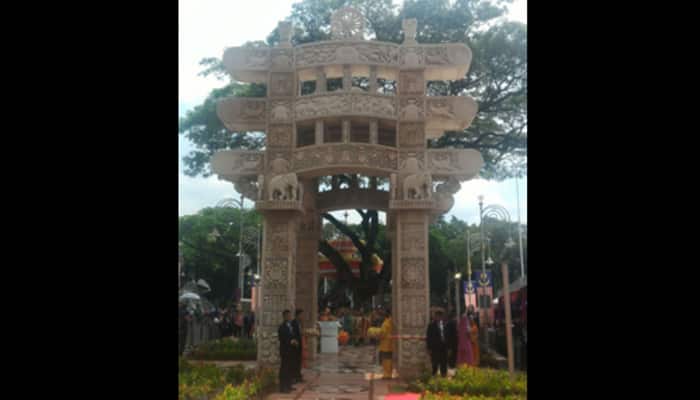 Kuala Lumpur: Indians visiting Kuala Lumpur make it a point to visit Brickfields. Known as 'Little India', busy suburb is home to the vibrant Indian community in the Malaysian capital.

Brickfields now has a new landmark – The Torana Gate.

Inaugurated by Prime Minister Narendra Modi and his Malaysian counterpart Najib Razak, the Torana Gate is being dubbed as a cornerstone of the friendship between India and Malaysia.

The intricately carved Torana, inspired by the Toranas of the great Buddhist sculpture of Sanchi, has carvings and relief work representing ancient Indian art as well as the Islamic art form.

"Toranas, built by the great Mauryan dynasty ruler, Ashoka, in first century BC, essentially depict symbols related to Buddhism. There is the Bodhi Tree, the lotus flowers, the jatakas tales and many other such illustrations, but we did not just replicate them as it would not match the inclusivity and acceptance that India stands for,” said Kshitij Jain, the chief designer and architect of the Torana.

Also Read: Religion should be delinked from terror, says PM Modi in Malaysia

The 10 metre high gate is a gift from India and cost RM 35mn. The Torana Gate project, which was launched by former Prime Minister Manmohan Singh, was supposed to have been completed by 2010 but got delayed by five-years.

A visit to Ramakrishna Mission in Petaling Jaya to inaugurate a statue of iconic Indian philosopher and spiritual leader Swami Vivekananda and offering prayers at Subramaniyar Temple in Batu Caves were also part of Modi's itinerary in Kuala Lumpur.