Tearful Christians gathered at the Virgin Mary and St Athanasius Church in Cairo where Coptic Pope Tawadros II prayed over the wooden coffins of the victims of Sunday`s bombing, one the deadliest attacks on the Christian minority in recent memory. 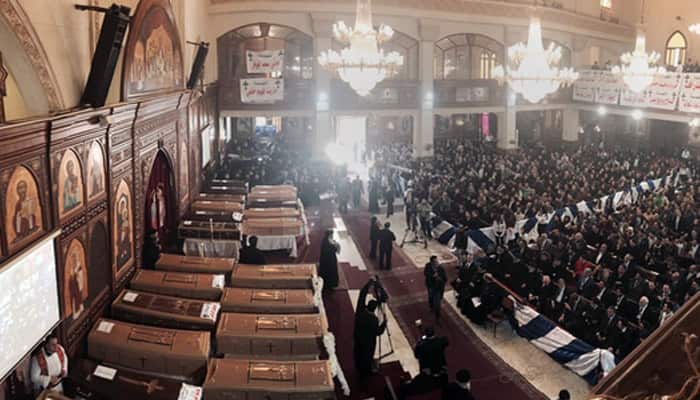 Cairo: Mourners packed an Egyptian church on Monday for a funeral service for 24 people killed in the bombing of Cairo`s main Coptic cathedral, while angry survivors accused authorities of security lapses.

Tearful Christians gathered at the Virgin Mary and St Athanasius Church in Cairo where Coptic Pope Tawadros II prayed over the wooden coffins of the victims of Sunday`s bombing, one the deadliest attacks on the Christian minority in recent memory.

On the walls hung banners bearing the names of the dead, many of them women.

Several hundred people gathered in the Madinat Nasr area furious at being denied entry to the church, where admittance was by invitation only for the families of victims.

There was also anger at hospitals treating the wounded.

Five survivors at Dar al-Shefa hospital said police did not conduct the usual checks as the cathedral was particularly busy for Sunday`s mass.

"There were large numbers so people entered without being searched," said Mina Francis, who was in the cathedral with his mother who was killed in the blast.

At least 24 people died and 49 were wounded when a bomb exploded in a chapel adjoining St Mark`s Cathedral, Cairo`s largest church and seat of the pope.

Security sources said at least six children were among the dead, with a bomb containing at least 12 kg (26 pounds) of TNT detonating on the side of the church used by women.

The chapel`s floor was covered in debris from shattered windows, its wooden pews blasted apart, its pillars blackened. Here and there lay abandoned shoes and patches of blood.

"God protect Egypt from evil and protect all Egyptians," Pope Tawadros told state television on Sunday, after cutting short a visit to Greece. "In times like this we lean on each other, stand together and offer condolences to each other. This grief we will share together."

President Abdel Fattah al-Sisi, who announced three days of mourning and vowed justice, is to attend a public ceremony later on Monday.

His economic reforms have angered the poor, a crackdown on the Muslim Brotherhood has seen thousands jailed and an insurgency rages in Northern Sinai, led by Islamic State`s Egyptian branch.

The group has also claimed attacks in Cairo and urged its supporters in recent weeks to launch attacks around the world as it goes on the defensive in its Iraqi and Syrian strongholds.

There was no immediate claim of responsibility, but exiled Brotherhood officials and other militant groups joined the international community in condemning the attack.

The United States said it would work with its partners to "defeat such terrorist acts". The UN Security Council urged all states to cooperate with investigators to find the culprits.

But Islamic State supporters celebrated on social media. "God bless the person who did this blessed act," wrote one supporter on Telegram.

Though Copts have traditionally supported the government, crowds gathered outside the cathedral on Sunday demanding revenge for the attack that took place on a Muslim holiday marking Prophet Mohammad`s birthday and weeks before Christmas.

Scuffles broke out as protesters accused police of security failures and demanded Sisi sack the interior minister. Some chanted "the people demand the fall of the regime", the rallying cry of the 2011 revolt that ended Hosni Mubarak`s 30-year rule.

At Demerdash hospital, relatives sat outside the operating theatres dressed in black, tears streaming down their cheeks.

The Health Ministry revised down the death toll from 25 overnight, but doctors said it was likely to rise as many people had suffered serious injuries and hospitals lacked drugs and equipment.

They face regular attack by Muslim neighbours, who burn their homes and churches in poor rural areas, usually in anger over an inter-faith romance or church construction.

The last major attack on a church took place as worshippers left a New Year`s service in Alexandria weeks before the start of the 2011 uprising.

At least 21 people were killed.

The circumstances remain a mystery and no one was punished.

In 2015, 21 Egyptian Christians working in Libya were killed by Islamic State.

"There were police cars stationed in front of the church gates .. I’ll tell you what they were doing, they were too busy eating breakfast and drinking tea and soda. They weren’t doing their job, they weren’t asking people going in and coming out," said Hani Gaballah, 43, a retired military officer.

"We have an incompetent government, look at the economy, we are surviving only because God is supporting us."