Telegu Titans improved their performance, but unluckily, they ran into a superb Patna Pirates in their Zone B match at Hyderabad. Skipper Rahul Chaudhary scored 12 points, and it was not enough. This is their fifth successive defeat in six matches. 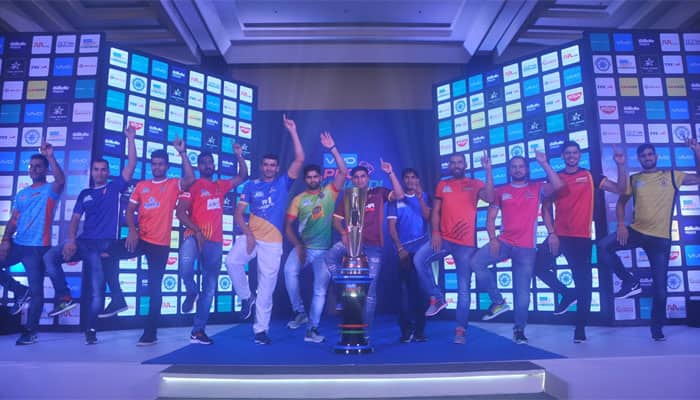 21:05 PM IST: Telegu Titans improved their performance, but unluckily, they ran into a superb Patna Pirates in their Zone B match at Hyderabad. Skipper Rahul Chaudhary scored 12 points, and it was not enough. This is their fifth successive defeat in six matches. Legendary Rakesh Kumar contributed with six points. For Pirates, Pardeep Narwal (12 points),  Monu Goyat (10) were the star performers.

20:59 PM IST: With seconds left in the match, what Titans needed was to restrict a defeat with more than seven points, but they went for the big tackle and paid the price.

Then, to make things worst, their challenge also got wasted even as the Pirates completed a huge win. Scorecard read 36 - 43 in favour of the Pirates.

20:54 PM IST: Rahul Chaudhari in on a roll. After getting rid of a Pirates raider, he quickly raided and returned with a point. Now the difference is eight points with a minutes play left.

20:52 PM IST: Sub for Pirates. Jawahar Dagar in for Vishal Mane. What a fight-back from the home side. They have added seven points on the trot, and managed to all out the Pirates. It's 30-40 in favour of the Pirates, though.

20:46 PM IST: This has become a one-way traffic despite an all out effort from the Titans to block the Pirates. With less than five minutes left in the match, Pirates lead Titans by 17 points.

For a change, Pirates have taken time-out.

20:33 PM IST: Titans scored quick points but Pirates are keeping it simple by matching their hosts point by point.

20:39 PM IST: This is unreal! Rahul Chaudhari didn't take the bonus point bait, and lost it.  Then, the Pirates made it a child's game by taking a huge lead. And as expected Titans have taken a time out. Much needed.

20:33 PM IST: Telegu Titans resumed the proceedings with Vikar raiding. But it was one empty raid from the home side. Rakshith comes in for Rohit Rana for Titans.

But the action is still dominated by the visitors. The lead now is seven points.

20:25 PM IST: Both the sides added one point each in their kitty, but it's still the Pirates who are leading the count at half-time. Seven points is big lead.

20:21 PM IST: Patna Pirates increased the lead to six with a tackle of Rahul Chaudhari and successful raid from Monu Goyat.

20:19 PM IST: With less than five minutes left in the half, Pirates have once again taken the lead. Pardeep Narwal was brilliant in his raid.

Then, within two raids, Pirates managed to all out Titans.

20:16 PM IST: Legendary Rakesh Kumar showed his brilliance with a good raid by escaping through the lobby. Titans scored one point, but again, they conceded two points.

Then, Rakesh involved himself in a super tackle. 12-12 now.

20:11 PM IST: Rakesh Kumar produced a brilliant block to complete the tackle, but Telegu Titans lost their raider in the subsequent play. Both the sides got one point each.

Then at 7-7, Pirates caught Rahul Chaudhari.

20:07 PM IST: First point for Telugu Titans, thanks to Nilesh Salunke's raid. Then the home side reduced the gap with a brilliant tackle, a complete team effort. Jaideep was struggling for space.

Minutes away from the first raid in this crucial Zone B match. Here are the starting sevens.

Here are the details on how to catch the match:

The match will be at 8 pm IST.

All the action on Wednesday will be at the Gachibowli Indoor Stadium in Hyderabad.