PKL 2019, U Mumba vs Telugu Titans: As it happened

U Mumba defeated Telugu Titans 31-25 in the opening match of the Pro Kabaddi League 2019 at the Gachibowli Indoor Stadium in Hyderabad on Saturday. 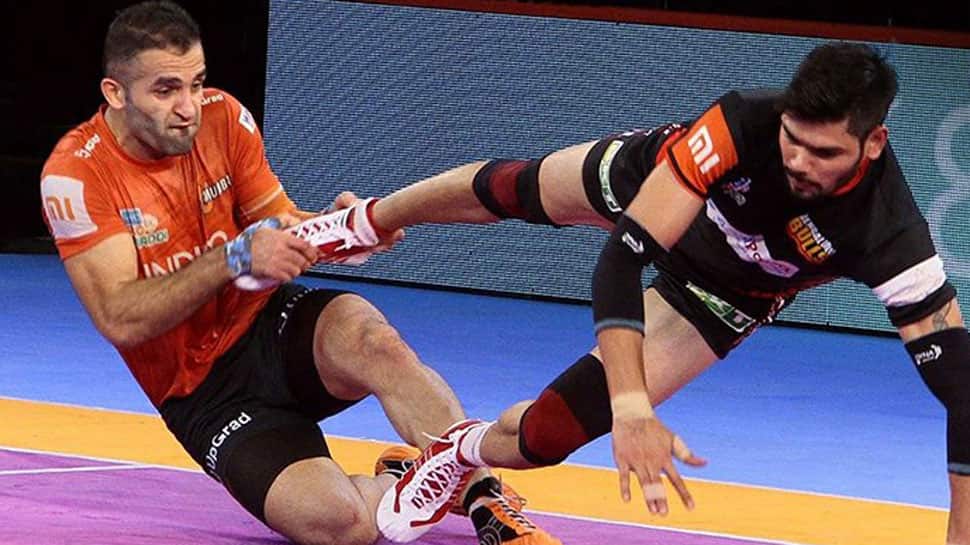 U Mumba defeated Abozar Mohajermighani-led Telugu Titans 31-25 in the opening match of the Pro Kabaddi League 2019 at the Gachibowli Indoor Stadium in Hyderabad on Saturday.

# The clash ends with a win for U Mumba who have defeated Telugu Titans 31-25 in the opening match of the tournament!

# Siddharth has been brought down by Atrachali resulting in a 11-point lead for the U Mumba!

# Nearly five minutes left in the contest as U Mumba continue to hold the lead at 26-19. However, nothing can be taken for granted with the Telugu Titans more than capable of making a comeback!

# 24-14 in favour of U Mumba against Telugu Titans following an excellent performance by the outfit as Sandeep clamps down Rajnish to secure the All Out!

# Superb performance by Abhishek Singh so far as U Mumba lead 19-11 against Telugu Titans with 16 minutes left to go for the end of the second half!

# The second half is set to start in a couple of seconds!

# The U Mumba lead 17-10 at half-time with Siddharth Desai yet to pick a single point against his former side!

# A healthy nine-point lead for U Mumba with just two minutes to go for the end of the first half!

# The U Mumba complete the first all-out of the match following a superb effort by Abhishek Singh, leading 13-7 against the Telugu Titans with nearly six minutes left on the clock!

The #Mumboys pick up the 1st All-Out of the match! Can they hold on to their lead in #HYDvMUM? Keep watching Star Sports to find out. #WorldsToughestDay #IsseToughKuchNahi

# U Mumba lead 8-4 points against the Telugu Titans following a vital two points by Rohit Baliyan, just one short of a Super raid.

# Both the sides are looking to play it safe rather than going for all-out attacks in the early stages of the game!

# However, U Mumba fail to hold on to the advantage for long as Fazel has to leave following an unsuccessful tackle!

# U Mumba lead 4-2 against Telugu Titans as Iranian Fazel Atrachali makes his presence felt with an excellent tackle against Siddharth Desai, following it up with another!

# Rajnish has started off proceedings with a bonus point as the Telugu Titans open their account in a strong fashion. Rohit Baliyan further earns a bonus for the U Mumbai ensuring a strong start for both the sides!

# Players from both the sides are ready to start the clash!

# Aakash Arsul will make his debut for the Telugu Titans!

# Harendra Kumar and Athul MS are set to make their respective debuts for the U Mumba!

# Here is the starting seven for the U Mumba!

# The fans are out in numbers ready to cheer on the Telugu Titans.

As #VIVOProKabaddiBegins, the fans are out in numbers in Hyderabad, ready to cheer on @Telugu_Titans!

Are you ready? Remember, #IsseToughKuchNahi!

Watch #VIVOProKabaddi Season 7 kick off LIVE tonight at 7 PM, only on Star Sports and Hotstar! pic.twitter.com/yIQFDp4QVE

# It will be interesting to see whether the Telugu Titans will miss Rahul Chaudhari this season!

# The toss is set to take place soon with the playing seven set to be announced soon!

# The first clash of the Pro Kabaddi League 2019 between Telugu Titans and U Mumba is set to begin in half an hour!

The mat has been laid out for the Panga to begin in #VIVOProKabaddi Season 7! Watch #HYDvMUM take centre stage, 7 PM onwards, LIVE on Star Sports and Hotstar. #WorldsToughestDay pic.twitter.com/QqpJDA5RwI

The seventh edition of the Pro Kabaddi League considered one of the most popular sporting tournaments in the country is set to start today as Telugu Titans take on U Mumba in the opening clash at the Gachibowli Indoor Stadium in Hyderabad.

Both the outfits are extremely strong defensively with the match-up between Fazel Atrachali and Siddharth Desai quite interesting to witness. Desai will be battling out against the U Mumba following an impressive debut campaign with the same franchise, making it an interesting clash to watch out for.

Abozar Mighani who is the newly appointed skipper of the Telegu Titans will be looking to maintain his fine show in the previous edition of the PKL alongside Vishal Bharadwaj against U Mumbai who have the likes of Abhishek Singh and Rohit Baliyan in the raiding unit.