Sonam Kapoor and Anand Ahuja‘s wedding reception had the who’s who of Bollywood in attendance. 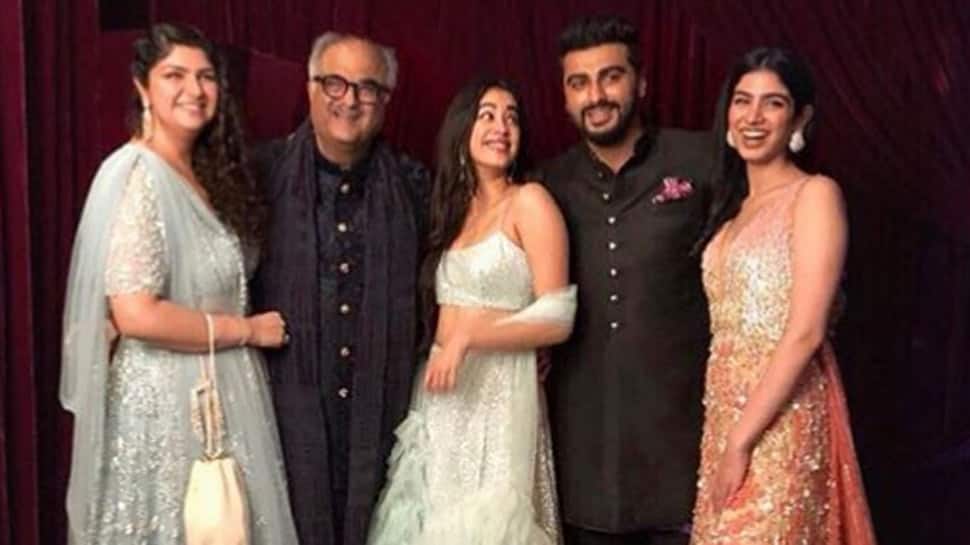 New Delhi: Sonam Kapoor and Anand Ahuja‘s wedding reception had the who’s who of Bollywood in attendance.

Bollywood’s biggest stars from the likes of Shah Rukh Khan, Ranveer Singh, Salman Khan, Shahid Kapoor, Alia Bhatt and Ranbir Kapoor among others were present at the party to congratulate and wish the couple for their joyous life ahead.

At this moment of happiness, everyone surely missed Sridevi, who passed away on February 25th due to accidental drowning in Dubai. However, it appears that the grief of losing their mothers, Mona Kapoor and Sridevi respectively has bridged the gap between Anshula Kapoor, Janhvi, Khushi and Arjun Kapoor.

And it was evident at the wedding reception of Sonam-Anand where, barely two months after the death of the love of his life, Boney looked happy in the company of his four children. He was seen posing with them for a family photograph at the event.

On Thursday, Anshula took to her Instagram to share a family photo from the reception featuring all the five of them in one frame. And wait, we can see how adorably Janhvi is looking at his big brother Arjun, who is seen giving million dollar smile just like his father.

On the work front, Arjun is busy shooting for 'Namastey England' with Parineeti Chopra.

He also has 'Sandeep Aur Pinky Faraar' and 'Panipat' in his kitty. Janhvi too is all geared to make her debut in Bollywood with 'Dhadak'. The film has been produced by Karan Johar's 'Dharma Productions' and is directed by Shashank Khaitan. Janhvi will be seen opposite Ishaan Khatter in the film. It is the official remake of the Marathi superhit 'Sairat'.

Kartik Aaryan injured after getting mobbed by crowd in Kolkata