New Delhi: Moroccan beauty Nora Fatehi made her Bollywood debut in the year 2014 and has come a long way since then. The actress shot to fame due to her killer dance moves in the song 'Dilbar' from 'Satyameva Jayate'. Since then, there has been no turning back for Nora and today, she is an internet sensation with mammoth fan-following.

The actress took to Instagram recently and shared a throwback photo from when she was about 17. The picture is of the first ever professional photoshoot of the dancer-actress.

Check out the screenshot of Nora's Instagram stories here: 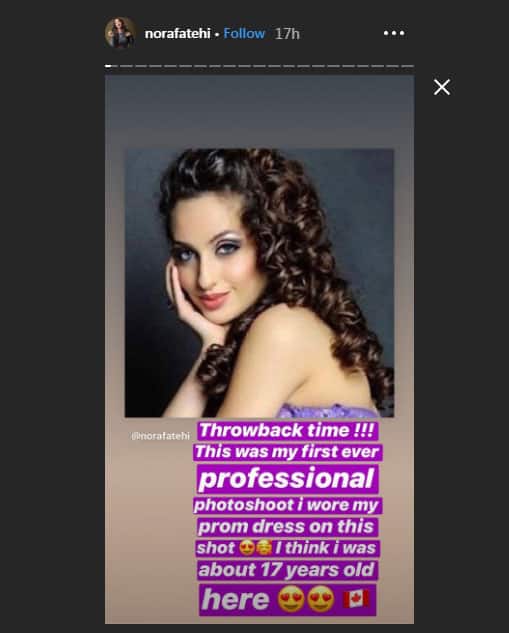 Nora will next be seen in Salman Khan and Katrina Kaif starrer 'Bharat'. The film is reportedly a remake of Korean film 'An Ode To My Father'. It has been helmed by Ali Abbas Zafar and marks Nora's first with the filmmaker. It also stars Disha Patani, Sunil Grover, Tabu and Varun Dhawan.

Apart from 'Bharat', the actress has teamed up with Varun for 'Street Dancer 3D '. The film also has Shraddha Kapoor on board and is being helmed by Remo D'Souza.

With such interesting projects, we can't help but wonder what more the actress has to offer!