Sonam attended the premiere of Brad Pitt and Leonardo Di Caprio starrer 'Once Upon a Time in Hollywood'. 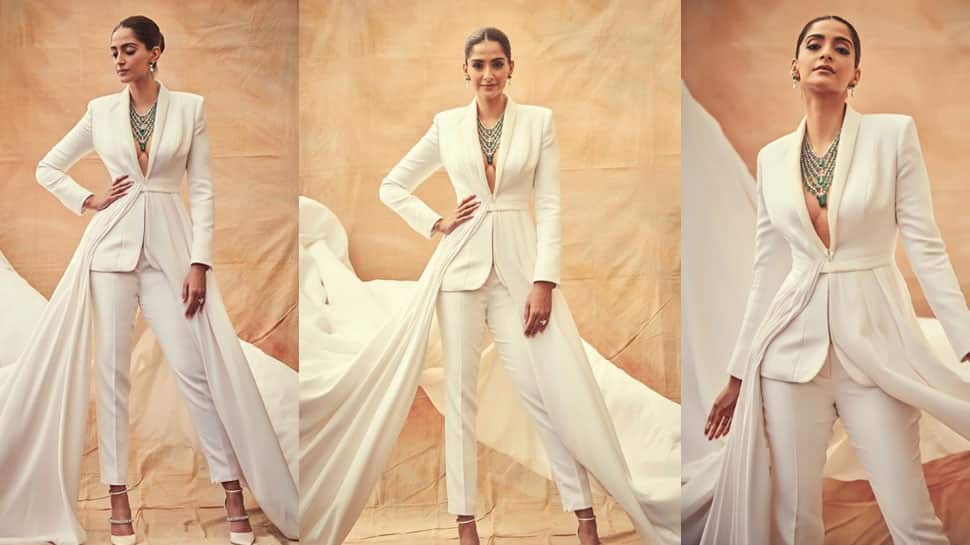 New Delhi: Bollywood stunner of an actress Sonam Kapoor is a fashion icon of Bollywood and rightly so. The gorgeous beauty has a massive fan following who are in awe of her style sense. The ravishing B-Towner is currently turning heads at the prestigious Cannes Film Festival with her breathtaking sartorial choices.

On her Day 2 at the red carpet, Sonam ditched flowy gowns and stunned in a white custom made Ralph and Russo couture tuxedo. She wore Chopard jewels to make a striking impression and all the drama in her eyes will make you wanna surf through her pictures again and again.

She is styled by her sister Rhea Kapoor and kudos to her for picking the best stuff for her elder sibling.

Check out her pictures from the red carpet today:

Walking the red carpet at Cannes for @chopard tonight dripping in 155 carats of Colombian emeralds, fitted in a @ralphandrusso couture tuxedo, @sonamkapoor

@sonamkapoor tonight for the premiere of Once Upon A Time in Hollywood tonight at the #cannesfilmfestival for @chopard In @ralphandrusso haute couture. Shoes by @jimmychoo

Sonam attended the premiere of Brad Pitt and Leonardo Di Caprio starrer 'Once Upon a Time in Hollywood'.

Earlier, she donned a blush red Maison Valentino, Elie Saab and custom made Abu Jani and Sandeep Khosla creations so far at the Cannes Film Festival. Each of her looks has been well-received by the fans on social media.

Cannes Film Festival is an annual movie festival held in France, which previews new films, including documentaries from all around the world. This is the 72nd Cannes festival which began from May 14 and will last till 25th of this month.

Aishwarya Rai Bachchan landed at Cannes with daughter Aaradhya by her side. She too has been making headlines for her exceptional looks this year at the red carpet.