Kohli was seen taking a different approach as he took throw downs for about 40 minutes from the local bowlers. 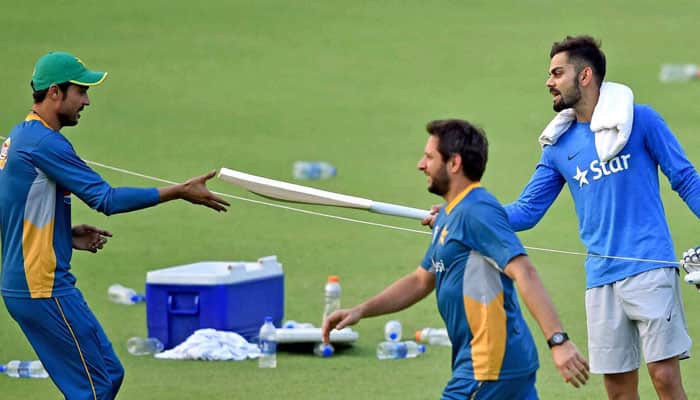 Kolkata: Off the field camaraderie between Virat Kohli and Mohammad Amir grabbed attention on eve of the much-awaited India-Pakistan contest in the ICC World T20 here on Saturday.

Just before the Indian team was about to leave Eden Gardens, Amir and Kohli greeted each other and were engaged in a long discussion.

Kohli also offered his bat to Amir, who was literally jumping with joy at the star Indian batsman's gesture and did some shadow practice with the willow.

While the rest of the Indian batsman had a rigorous batting session, Kohli was seen taking a different approach as he took throw downs for about 40 minutes from the local bowlers.

Having come a cropper against New Zealand spinners to be bowled out for 79, the intention basically was to clear the rope which the Indian batsmen did with ease.

Earlier, former Indian captain and CAB president Sourav Ganguly removed the pitch covers when Indians checked in the afternoon and Kohli rushed to have a first look at it.

Ganguly, who had already said the pitch would be a belter, was seen talking to Kohli for long before the former India captain was joined by his old teammates Harbhajan Singh, Yuvraj Singh and Ashish Nehra.