Tendulkar, who made his India debut in a Test match against Pakistan in 1989 as a 16-year-old in Karachi, is still the game's greatest run aggregator. 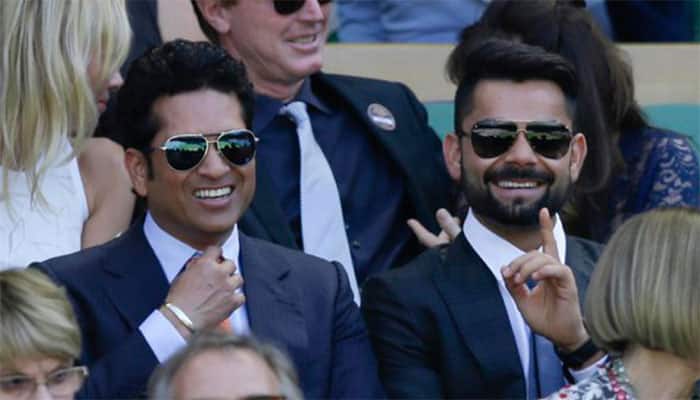 New Delhi: Comparison is a futile practice. But every now and then, through the ages, we find ourselves comparing the beauties, the greats, and what not – irrespective of scale and standard.

And when it comes to cricket, specially in India, such a comparison attracts special attention. Because, cricket is the game. Yes, it's supposed to be a religion, and Sachin Tendulkar — the presiding god. Even after retiring from cricket, the little master continued to command an unrivaled respect. He is in fact the yardstick of batting.

But a certain Virat Kohli has challenged Tendulkar's god-like status, forcing many to compare between the two Indians. Who's better?

"Cricket has had eras. In the eighties, it was Viv Richards, and then you had Brian Lara and Sachin Tendulkar who stood out. Virat Kohli is one of the most complete players I’ve seen. He’s so versatile; he plays on both feet, and on all sides of the field,’’ Khan told Hindutan Times in an exclusive interview.

Then the cricketer-turned-politician spelled out his verdict, in favour of Kohli.

“Apart from his talent and technique, he has a very good temperament. His temperament is better than Sachin’s. Kohli performs at the most difficult of opportunities, which Sachin sometimes wasn’t able to,” he said.

And he had a very poignant point of reference, an undeniably accurate one.

“It was very painful watching Pakistan lose, but Kohli played a very good game. I look at batsmen from a bowler’s point of view and I think of how to get them out. Just look at how Kohli plays in difficult situations. He’s better than anyone. I’d say he’s the best internationally, today. You can back him to play any match,” Khan relate.

He was referring to a 2016 World T20 match between India and Pakistan in Kolkata, in which Kohli scored a match winning knock of 55 off just 37 balls.

Tendulkar, who made his India debut in a Test match against Pakistan in 1989 as a 16-year-old in Karachi, is still the game's greatest run aggregator. The owner of hundred hundreds has etched batting records which are likely to stay for eternity.

But Kohli is making his own yardsticks, and if the 27-year-old manages to play as long as Tendulkar, then those seemingly unbreakable records are sure to be tested.