Removing Trump from office would require a two-thirds majority of those present and voting in the 100-member Senate, meaning at least 20 Republicans would have to vote to convict the president. 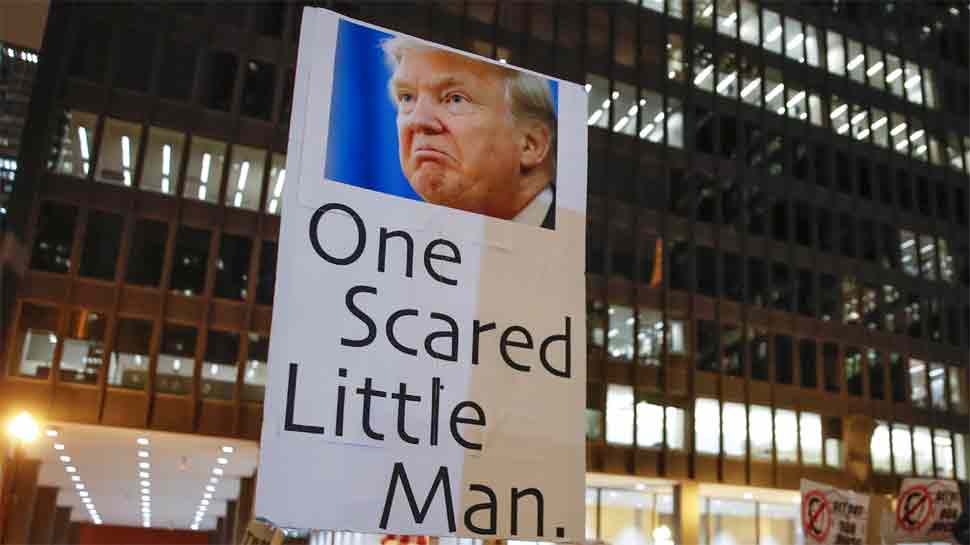 WASHINGTON: A bitterly divided US House of Representatives neared a historic vote to impeach Donald Trump on Wednesday after a day-long debate in which Democrats called the president a threat to democracy and Republicans called the proceedings a partisan coup.

With partisan differences on full display, the Democratic-led House prepared to vote on two articles of impeachment alleging abuse of power and obstruction arising from the president`s actions toward Ukraine.

Trump would become the third U.S. president to be impeached. That would set the stage for a trial in the Republican-led Senate next month, with House members acting as prosecutors and senators as jurors. A conviction would result in his removal from office, but the Senate`s top Republican has said there is "no chance" of that happening.

On the House floor, House Speaker Nancy Pelosi read the U.S. Pledge of Allegiance, then said: "Today we are here to defend democracy for the people," to applause from fellow Democratic lawmakers.

As the debate unfolded, Trump on Twitter called the proceedings "AN ASSAULT ON AMERICA" and on his party. Trump, who has denied wrongdoing, later added of Pelosi: "Will go down in history as worst Speaker."

While the House twice previously voted to impeach presidents - Bill Clinton in 1998 and Andrew Johnson in 1868 - no president has ever been removed from office via impeachment.

Separate votes on the two charges are expected in the early evening. The votes are expected to fall almost entirely along party lines, with Democrats in favor and Republicans opposed.

In speeches on the House floor, Republicans defended the president and accused Democrats of seeking to use an unfair, rigged process to nullify the results of the 2016 election in which Trump defeated Democrat Hillary Clinton. The House voted down a Republican bid to adjourn and a motion accusing Democrats of violating the chamber`s rules.

"If we do not act now, we would be derelict in our duty. It is tragic that the president`s reckless actions make impeachment necessary," Pelosi said, adding that "he gave us no choice."

"It is a matter of fact that the president is an ongoing threat to our national security and the integrity of our elections - the basis of our democracy," Pelosi said.

House Democrats accuse Trump, 73, of abusing his power by asking Ukraine to investigate former Vice President Joe Biden, a leading contender for the Democratic nomination to face Trump in the November 2020 election. Trump is also accused of obstructing the House investigation by directing administration officials and agencies not to comply with subpoenas for testimony and documents related to impeachment.

Republican Representative Mike Rogers said: "The matter before the House today is based solely on a fundamental hatred of our president. It`s a sham, a witch hunt - and it`s tantamount to a coup against the duly elected president of the United States."

The debate underscored the deep divide in Congress over Trump`s conduct during his tumultuous presidency and the larger political schism dividing the United States.

Republican Representative Mike Kelly compared the impeachment to the Japanese attack on Hawaii`s Pearl Harbor in 1941, calling the House proceedings another "date that will live in infamy," similar to the words Democratic President Franklin Roosevelt used to describe the raid that killed about 2,400 people and led to America`s entry into World War Two.

`GREAT FEAR`
Impeachment is an extraordinary check on presidential power spelled out in the Constitution enabling Congress to remove presidents who commit "high crimes and misdemeanors."

"The founders` great fear of a rogue or corrupt president is the very reason why they enshrined impeachment in the Constitution," Pelosi said, calling the gathered lawmakers the "custodians of the Constitution."

The House vote to approve the rules to formally begin debate was 228-197, a possible preview of the later votes on the articles of impeachment, with only two Democrats - Representatives Collin Peterson and Jeff Van Drew - voting no and no Republicans voting in favor.

Van Drew has announced plans to become a Republican. Representative Justin Amash, an independent who left the Republican Party in July, joined the Democrats in the vote.

Vice President Mike Pence, speaking in Michigan, touted the economy under Trump and called the House proceedings "a disgrace."
"They are trying to impeach this president because they know they can`t defeat this president" in 2020, Pence said.

But House Judiciary Committee Chairman Jerrold Nadler said on the House floor: "We cannot rely on the next election as a remedy for presidential misconduct when the president threatens the very integrity of that election. He has shown he will continue to put his selfish interests above the good of the country. We must act without delay."

Fearful of political blowback, senior Democrats long resisted an impeachment inquiry, even after Special Counsel Robert Mueller outlined episodes of Trump seeking to impede the federal investigation that documented Russian interference in the 2016 election to boost his candidacy.

But after a whistleblower from the U.S. intelligence community brought to light a July 25 phone call in which Trump asked Ukrainian President Volodymyr Zelenskiy to investigate Biden, House Democrats launched an impeachment inquiry in September and moved swiftly to take testimony from current and former administration officials.

On the July telephone call, Trump asked Zelenskiy to investigate Biden and his son Hunter Biden as well as a discredited theory promoted by the president and beneficial to Russia that Democrats conspired with Ukraine to meddle in the 2016 election. Hunter Biden had joined the board of Ukrainian energy company Burisma while his father was vice president. Trump has accused the Bidens of corruption without offering evidence. They have denied wrongdoing.

During the debate, Nadler accused Republican Representative Louie Gohmert of spouting "Russian propaganda on the floor of the House" after Gohmert said the impeachment inquiry was impeding an investigation of alleged Ukrainian interference in the 2016 election. An angry and shouting Gohmert came back to the podium, only to be gaveled into silence by the presiding Democrat, Representative Diana DeGette.

Senator Lindsey Graham, the Senate Judiciary Committee`s Republican chairman, said on Wednesday he would want any impeachment trial to be quick and with no new witnesses.

Removing Trump from office would require a two-thirds majority of those present and voting in the 100-member Senate, meaning at least 20 Republicans would have to vote to convict the president.