Abhijit Banerjee and Esther Duflo won the Nobel Prize in Economics along with American economist Michael Kremer for "for their experimental approach to alleviating global poverty". 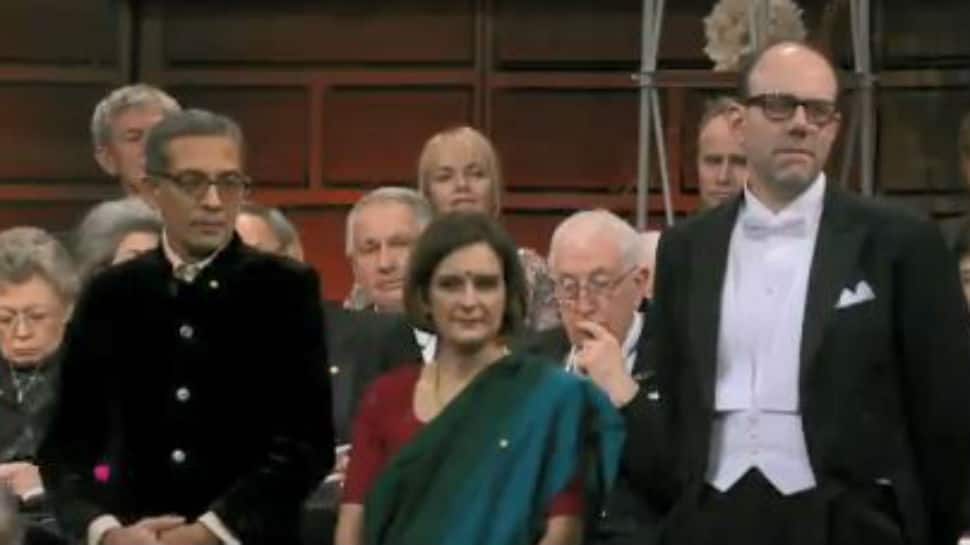 New Delhi: Indian-American professor Abhijit Banerjee and his wife Esther Duflo, who won the Nobel Prize in Economics earlier in October, received their awards at Stockholm Concert Hall in Sweden on Tuesday. For the ceremony, the couple chose to wear Indian attires - Banerjee opted for a dhoti and kurta set with bandhgala while Duflo draped a sari. They won the prestigious award along with American economist Michael Kremer for "for their experimental approach to alleviating global poverty".

A video shared by The Nobel Prize on Twitter shows the trio receiving their Nobel Prizes. "Watch Abhijit Banerjee, Esther Duflo and Michael Kremer receive their medals and diplomas at the Nobel Prize award ceremony today. Congratulations! They were awarded the 2019 Prize in Economic Sciences 'for their experimental approach to alleviating global poverty'," read the caption of the post.

They were awarded the 2019 Prize in Economic Sciences “for their experimental approach to alleviating global poverty.” pic.twitter.com/c3ltP7EXcF

Banerjee and Duflo, who have been married for over four years now, work at the Massachusetts Institute of Technology (MIT), Cambridge, MA, US.

French-American Duflo is only the second female Economics winner in the prize's 50-year history, as well as the youngest at 46.

Born on February 21, 1961, in Kolkata, Banerjee, 58, attended South Point School and Presidency College, where he completed his BS degree in Economics. Banerjee has done his MA in Economics from Jawaharlal Nehru University (JNU), Delhi. He did his PhD from Harvard University, Cambridge, US.

Banerjee is also the co-founder of the Abdul Latif Jameel Poverty Action Lab along with Duflo and Sendhil Mullainathan. He also served on the UN Secretary-General's High-level Panel of Eminent Persons on the Post-2015 Development Agenda.

He is the second Indian after Amartya Sen to win the Nobel Prize in Economics.

After being named for the prestigious award, Banerjee visited India. He met Prime Minister Narendra Modi in New Delhi and later went to JNU. After completing his Delhi visit, he flew to Kolkata, his home town.

The Academy said the work of the three economists had shown how the problem of poverty could be tackled by breaking it down into smaller and more precise questions in areas such as education and healthcare, making problems easier to tackle.

"As a direct result of one of their studies, more than five million Indian children have benefited from effective programmes of remedial tutoring in school," the Academy said in a statement.

"Another example is the heavy subsidies for preventive healthcare that have been introduced in many countries," it added.