Modi's aggressive statement well received by 59,000: Trump on Kashmir as Imran looks on

Trump also said that he hoped for both the countries--India and Pakistan--will be able to come together on the Kashmir matter and do something that will result in the good for the countries. He added that there's always a solution to every problem. 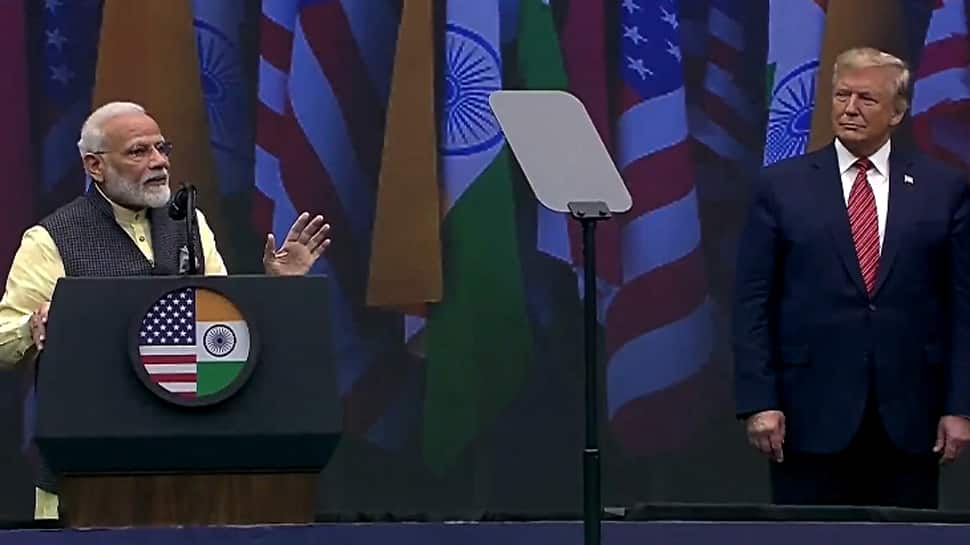 US President Donald Trump claimed that Prime Minister Narendra Modi made an aggressive statement at the 'Howdy, Modi' event at Texas, adding that it was very well received within the room comprising 59,000 people. While Trump made this statement, Pakistan Prime Minister was sitting right beside him during a meet on the sidelines of the United Nations General Assembly (UNGA) in New York on Monday.

Trump also said that he hoped for both the countries--India and Pakistan--will be able to come together on the Kashmir matter and do something that will result in the good for the countries. He added that there's always a solution to every problem.

During the meet, Trump was asked questions on Kashmir over which Pakistan has been trying to malign India in front of the international community. "I’d like to see everything work out.  I want it to be humane.  I want everybody to be treated well.  You have two big countries, and they’re warring countries and they’ve been fighting," said Trump.

On Sunday, PM Modi had launched a scathing attack on Pakistan at the Howdy Modi event, which was attended by sea of Indian Americans besides Trump and other lawmakers. PM Modi referred to both 9/11 as well as 26/11 Mumbai attacks in his speech. He suggested that the perpetrators of both the attacks came from Pakistan and the whole world is aware about the fact. Talking about the menace of terrorism, he had said, “Whether it is 9/11 in America or 26/11 in Mumbai, where are its conspirators found? The branchild is always found in the same place.”

PM Modi had also added that the need of the hour was to fight a “decisive battle against the perpetrators and supporters of terrorism”. He further hit out at Pakistan over its attempts to counter India’s move to abrogate Article 370, which granted special status to Jammu and Kashmir. Without naming Pakistan, the Prime Minister said that “these people are those who spread terrorism”.

“Some people have problems with what India is doing. Those people are not able to tackle their country. They have made their country the place of hate. These people are those who spread terrorism,” said Modi. He added, “Their politics is hatred towards India and cultivation of terrorism.”

The Prime Minister had further said that "India has given farewell to 70-year-old Article 370, which allowed terrorism and separatism to rear its head in Jammu and Kashmir".

US President Donald Trump, who was a special guest at the grand event in Houston, also vowed to fight against the menace of terrorism.

With Iran on his mind, US President Donald Trump to speak before UN General Assembly