This is Prime Minister`s second visit to Brazil and his first visit after the new administration led by Brazil President Jair Messias Bolsonaro assumed office on January 2019. PM Modi had met Brazilian president in Osaka earlier in 2019 on the margins of the G20 summit. 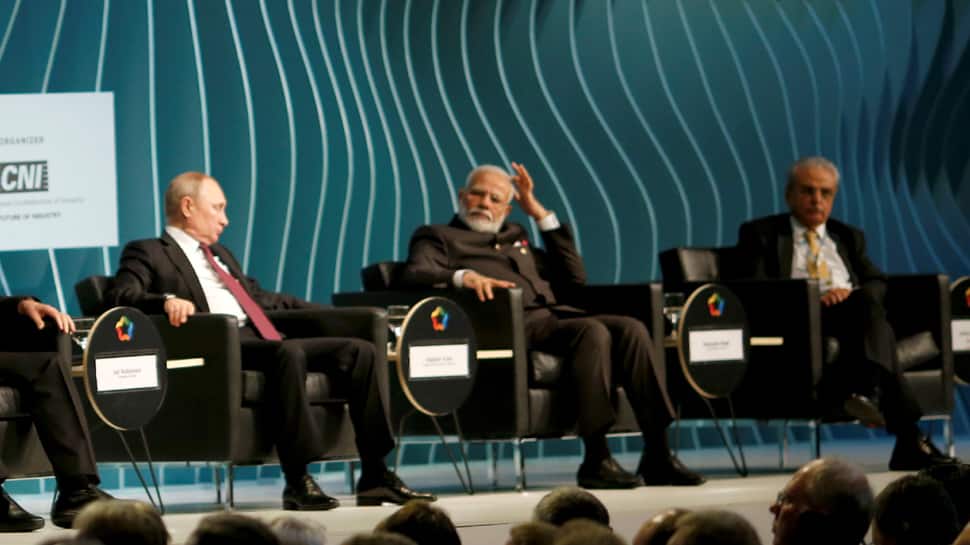 This is Prime Minister`s second visit to Brazil and his first visit after the new administration led by Brazil President Jair Messias Bolsonaro assumed office on January 2019. PM Modi had met Brazilian president in Osaka earlier in 2019 on the margins of the G20 summit.

The 11th BRICS summit will focus on strengthening ties among the five countries in key areas such as digital economy, science, and technology, as well as in building mechanisms for counter-terrorism cooperation. The theme of this year`s summit is `Economic Growth for an Innovative Future`.

According to the itinerary, the programme will start with the family photo at the Itamaraty Palace at 5.45 pm (IST), followed by a closed session of the summit at 6 pm (IST) and plenary session at 7.10 pm (IST).

The leaders dialogue with BRICS Business Council and New Development Bank is scheduled to take place at 8.30 pm (IST) with lunch hosted by Brazil Bolsonaro at 9.30 pm (IST).

The PM will emplane for Delhi via Frankfurt at midnight 12 (IST).

PM Modi had an "excellent" meeting with Russian President Vladimir Putin on the sidelines of the BRICS summit here, during which the two leaders reviewed the full range of bilateral ties. He had tweeted, "Had an excellent meeting with President Putin. During our talks, we reviewed the full range of India-Russia relations. India and Russia are cooperating extensively in areas such as trade, security and culture. The people of our nations will benefit due to close bilateral ties."

During the meeting, their fourth this year, saw President Putin reiterate his invitation to PM Modi to visit Moscow to participate in the Victory Day celebrations in 2020, which Modi gladly accepted. President Putin also highlight the potential of the Arctic region in natural gas and invited India to invest in the region.

Prime Minister Narendra Modi and Chinese President Xi Jinping also met on the sidelines of the BRICS summit. They agreed on the importance of maintaining close dialogue on matters relating to trade and investment. During the talks, the Chinese president conveyed his deep appreciation to Modi for hosting him at the 2nd Informal Summit in Mahabalipuram and said he would not forget the welcome given to him by PM Modi and the people of India, said an MEA statement.