A bilateral treaty gives both countries the right to use the sea, which lies between them and is linked by the narrow Kerch Strait to the Black Sea. 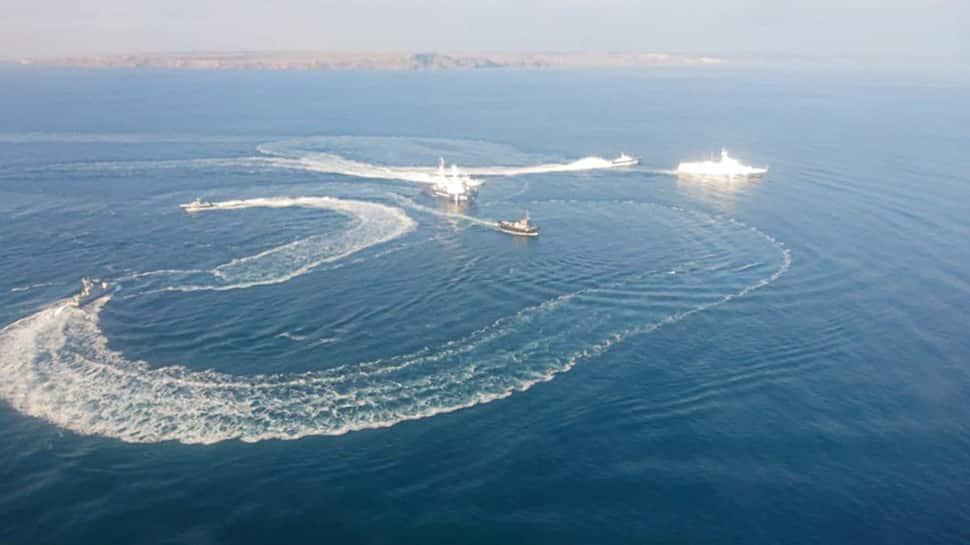 Russia stopped three Ukrainian navy vessels from entering the Sea of Azov via the Kerch Strait on Sunday by placing a huge cargo ship beneath a Russian-controlled bridge, with officials from both countries accusing the other of provocative behaviour.

A bilateral treaty gives both countries the right to use the sea, which lies between them and is linked by the narrow Kerch Strait to the Black Sea. But tensions around the sea have escalated since Russia annexed Ukraine's nearby Crimea in 2014.

Moscow is able to control access between the Sea of Azov and the Black Sea after it built a bridge that straddles the Kerch Strait between Crimea and southern Russia.

A Reuters witness said on Sunday that a bulk cargo ship had been used to block the channel beneath the bridge and that he had seen two Russian Sukhoi Su-25 warplanes flying overhead. Russian state TV said Russian combat helicopters had also been deployed to the area.

The Ukrainian navy said a Russian border guard vessel had rammed the tug boat, damaging it in an incident it said showed Russia was behaving aggressively and illegally.

It said its vessels had every right to be where they were and that the ships had been en route from the Black Sea port of Odessa to Mariupol, a journey that requires them to go through the Kerch Strait.

Russia's border guard service accused Ukraine of not informing it in advance of the journey, something Kiev denied, and said the Ukrainian ships had been manoeuvring dangerously and ignoring its instructions with the aim of stirring up tensions.

It pledged to end to what it described as Ukraine's "provocative actions", while Russian politicians lined up to denounce Kiev, saying the incident looked like a calculated attempt by President Petro Poroshenko to increase his popularity ahead of an election next year.

Ukraine's foreign ministry said in a statement it wanted a clear response to the incident from the international community.

"Russia's provocative actions in the Black Sea and the Sea of Azov have crossed the line and become aggressive," it said. "Russian ships have violated our freedom of maritime navigation and unlawfully used force against Ukrainian naval ships."

Both countries have accused each other of harassing each other's shipping in Sea of Azov in the past and the US State Department in August said Russia's actions looked designed to destabilise Ukraine, which has two major industrial ports there.