Then there is Javed Jaffrey as a shrink who nearly gets bashed up by Ajay for suggesting that he, Ajay, is just an aging man with an overactive libido. 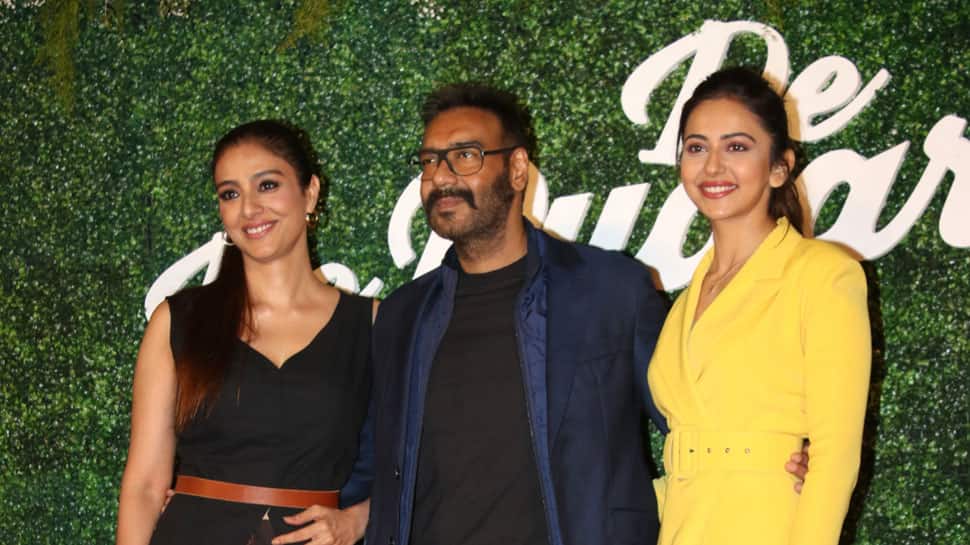 Mumbai: What better gift for Ajay Devgn on his 50th birthday than "De De Pyar De"? The trailer was released on the actor-producer's birthday on Tuesday, and one can't really think of a more opportune vehicle to cross 50.

In what could possibly be the most well-timed film release of all times, Ajay plays a 50-year man Ashish, who falls in love with a 20-something girl Ayesha, who comes across as remarkably rude in the trailer.

When someone comments that Ajay's wife, played by the ethereal Tabu, doesn't look her age, Rakul Preet Singh, playing the jealous girlfriend, retorts: "Oh yes, she does." Ahem.

My sympathies for the wife. The fact that Ayesha is played by Rakul, who is pitched against Tabu in the film, does make the battle between Ajay's ‘current' and ‘ex' seem unequal.

Having said that, the trailer just washes way all the misgivings as it plunges into a goofy, bumpy, rollicking joyride for Ajay as he embarks on an affair that everyone -- from his ex-wife (Tabu), to his father (Alok Nath) to his mother (Madhumalti Kapoor) to his two grownup children, hate.

Then there is Javed Jaffrey as a shrink who nearly gets bashed up by Ajay for suggesting that he, Ajay, is just an aging man with an overactive libido.

The sparks fly swiftly and high in the trailer which crackles with humorous quips, and actors who know their humour chops well enough and wind their funnybones around some of the pithiest lines and situations regarding a 50-plus man's infatuation with a woman half his age I have heard in any film about a mismatched alliance. Remember Madhur Bhandarkar's "Dil Toh Baccha Hai Ji"?

When someone asks Ajay in the trailer to name mismatched couples who have been able to make a success of their relationship, he rattles out, "Michael Douglas and Catherine Zeta-Jones, George Clooney and his wife and, ahem, Saif and Kareena."

Hopefully, we can add Priyanka Chopra Jonas and Nick Jonas to that list in the future. In the meanwhile, a big thumbs up to producer-writer Luv Ranjan and debut director Akiv Ali. The trailer of "De De Pyar De" lays out the entire blueprint of the plot and still leaves us hankering for more.