Chinese e-commerce giant Alibaba has posted 24.3 per cent jump in total sales to $38.3 billion during the 11th edition of mega 24-hour Singles` Day shopping event. The high-double digit growth in the Global Shopping Festival, branded as Double 11, holds high hopes for the Chinese economy which has slowed down in the wake of global trade war and sagging demand. 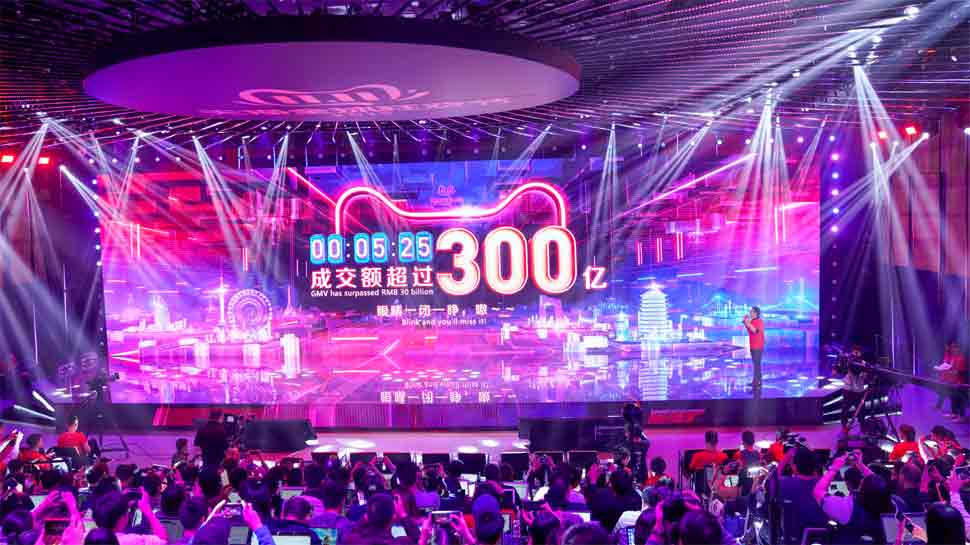 HANGZHOU: Chinese e-commerce giant Alibaba has posted 24.3 per cent jump in total sales to $38.3 billion during the 11th edition of mega 24-hour Singles` Day shopping event. The high-double digit growth in the Global Shopping Festival, branded as Double 11, holds high hopes for the Chinese economy which has slowed down in the wake of global trade war and sagging demand.

The e-commerce behemoth had recorded total sales of $30.8 billion worth of merchandise during its one-day shopping event in 2018. Alibaba`s sales across its various platforms crossed $10 billion within half an hour of the global shopping festival, 2019 kicking off on Sunday midnight.

The shopping blitz also witnessed 200,000 brands participating in the mega event which has over the years become an important date in the Chinese calendar. The mega shopping event now kicks off with pomp and grandeur.

The Singles` Day 24-hour sales which offer deals and bargains to millions of shoppers has surpassed the sales of all similar events such as Cyber Monday and Black Friday.

On Sunday night, the sales on Alibaba platforms skyrocketed to $1 billion within two minutes. The number of orders created at peak of this year`s Global Shopping Festival reached 544,000 orders in a second, 1,360 times that of the first edition of the festival in 2009.

Among various factors which drove Alibaba group`s Singles` Day sales were live streaming and fusion of online and offline retails. Live streaming by sellers has been engaging more customers with their fun-filled digital content.

Chris Tung, CMO, Alibaba Group reportedly said that Double 11 Global Shopping Festival has transformed itself from a promotional event into a global phenomenon, adding that Alibaba platforms support brands from all over the world including small and medium enterprises (SMEs) to engage with their online customers.

The 11th edition of the Singles` Day festival saw higher sales from across categories such as beauty care, health supplements, electronics and apparels. A host of global brands such as Apple, Nike, Puma, Adidas and Panasonic participated in the Singles` Day sales.

Fan Jiang, President of Taobao and Tmall said that fusion of online and offline had also contributed to the gross merchandise value (GMV) of sales. GMV is the aggregate value of all goods and services sold in a particular period.

With a market value of $486 billion, the Chinese retail giant kicked off this year`s 24-hour shopping bonanza with a live performance by US pop star Taylor Swift followed by live-streamed marketing of over 1,000 brands. The firm said 84 brands including those of Apple Inc, L`Oreal SA and Fast Retailing Co Ltd`s Uniqlo each made over 100 million yuan in sales in the first hour.

Singles` Day is known to be a stressful time for Alibaba employees with workers sleeping at the office to keep up with orders. This year, at Alibaba`s campus in Hangzhou, workers bustle around in red t-shirts with the slogan `Make 11 happen`.

This is the first time Alibaba`s Singles` Day is being held since its flamboyant co-founder Jack Ma resigned as chairman in September to "start a new life".

$1 billion in sales in first 68 seconds

The 24-hour shopping event is akin to Black Friday and Cyber Monday in the United States and has become a highlight of China`s e-commerce industry, with other retailers running concurrent promotions. This year, Alibaba netted $1 billion in sales in the event`s first 68 seconds. Here are some quick facts about China`s e-commerce`s industry:

1. WORLD`S BIGGEST: China is on track to book $1.94 trillion in e-commerce sales in 2019, more than three times the United States which is in second place with $586.92 billion, a report from researcher eMarketer shows. China on its own represents 54.7% of the global e-commerce market, nearly twice the share of the next five countries combined, the report showed. However, the country is ranked fourth when it comes to forecast e-commerce sales growth for 2019, behind Mexico, India and the Philippines, according to eMarketer.

2. TOP PLAYERS: Alibaba`s e-commerce marketplaces, business-to-consumer Tmall and Taobao, where both individuals and businesses set up shop, are China`s dominant shopping platforms, hosting thousands of merchants selling products as varied as T-shirts, household sundries and four-poster beds. The firm`s competitors include longtime rival JD.com, which sources goods and sells them directly to consumers, and four-year-old Pinduoduo Inc that managed to break into the top ranks by courting China`s rural residents with deep discounts and a group-buying model.

4. HOW ARE THEY FARING?: The rapid growth of Alibaba and JD.com has tracked that of China`s economy and the expansion of its middle class over the past two decades. This, however, has also made them vulnerable, as the economy slows to its weakest pace in almost three decades and retail sales post their slowest growth since early 2003. Alibaba said revenue for the quarter to September-end for its core commerce business rose 40% year-on-year, versus 56% in the same period in 2018.

Their next step, as a result, has been to diversify, with Alibaba moving into financial services, cloud computing and artificial intelligence (AI), while JD.com has invested in AI to improve its logistics and advertising capabilities.