The victory was India`s seventh test series win in a row, dating back to their triumph in Sri Lanka in August 2015. 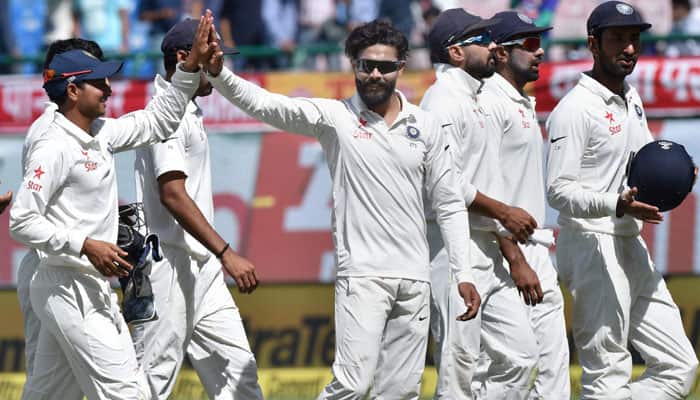 Dharamsala: Opener Lokesh Rahul and skipper Ajinkya Rahane steered India to an eight-wicket win in the fourth and final test against Australia to secure a 2-1 series victory for the hosts at the Himachal Pradesh Cricket Association Stadium on Tuesday.

Rahul made 51 not out and Rahane added a quickfire unbeaten 38 to help the hosts chase down the 106-run victory target with more than five sessions to spare.

Rahul scored the winning run, completing his sixth fifty of the series in the process. (IND vs AUS, Dharamsala Test, Day 4 - As it happened | Full Coverage)

Wrapping up the win appeared just a formality for India when their openers walked out to bat needing 87 runs to win the series with all 10 second innings wickets intact.

Josh Hazlewood was determined to make sure it was not a walk in the park, however, and struck Murali Vijay`s pad back-to-back in the very first over. Both the leg-before appeals were turned down.

Rahul was fluent against spin, driving and sweeping Steve O`Keefe for a couple of boundaries in the left-arm spinner`s second over of the day.

Pat Cummins injected brief excitement in his second over of the day when two Indian wickets fell.

The paceman dismissed Vijay caught behind for eight with his first delivery, and five balls later, a scoreless Cheteshwar Pujara, normally a good judge of singles, was run out chasing a risky run.

Glenn Maxwell did an excellent job at point, where he collected Pujara`s push and threw down the middle stump at the non-striker`s end with the batsman well short of crease after a mix-up with Rahul.

Leading the side in the absence of injured regular skipper Virat Kohli, Rahane played with uncharacteristic aggression, hitting Cummins for back-to-back sixes at the HPCA Stadium which debuted as a test venue with this match.

The victory was India`s seventh test series win in a row, dating back to their triumph in Sri Lanka in August 2015.

It also marked the end of India`s 13-test home season, in which they won 10, drew two and had the lone loss to Australia in the series opener in Pune.