India were bowled out for 281 runs after being handed a target of 314 runs by Australia. Skipper Virat Kohli was the highest run-scorer for the hosts scoring 123 runs off 95 deliveries. 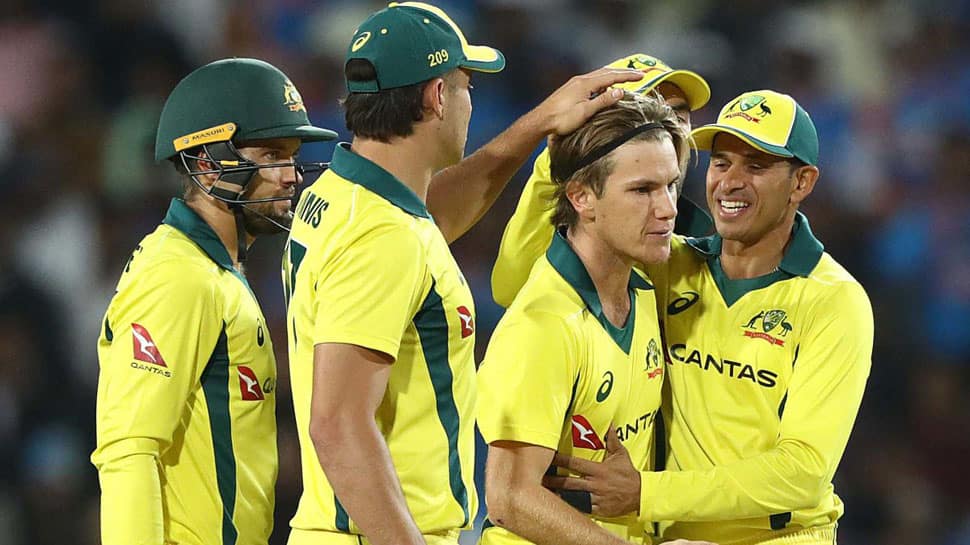 India were bowled out for 281 runs after being handed a target of 314 runs by Australia. Skipper Virat Kohli was the highest run-scorer for the hosts scoring 123 runs off 95 deliveries.

#Wicket! Kuldeep Yadav departs for 10 as he goes for a big hit without proper contact resulting in a catch to Aaron Finch!

# Pat Cummins set to bowl the 49th over!

# Wicket! Shami departs for 8 runs as he attempts a big hit off a slower delivery by Jhye Richardson without much success. India 281/9 (47.5 overs)

# Mohammed Shami is the next batsman in!

# Maxwell set to bowl his fifth over!

# Kuldeep Yadav is the new man in!

# Wicket! Vijay Shankar departs for 32 runs off 30 deliveries after handing a catch to Jhye Richardson off the last delivery of the over. India 251/7 (42.6 overs)

# Nathan Lyon set to bowl his ninth over!

# Wicket! Virat Kohli departs for 123 after going for a third consecutive boundary, but failing to generate any proper connect resulting in the ball hitting the stumps. India 219/6 (37.3 overs)

# Glenn Maxwell set to bowl his third over!

# Virat Kohli set to bowl his 8th over!

# Stoinis to bowl his sixth over!

# Zampa set to bowl his fifth over!

# Zampa to bowl his third over!

# Lyon set to bowl his fifth over!

# Wicket! Dhoni dismissed for 26 following a thick inside edge off an Adam Zampa delivery which rolls back to hit the base of leg-stump. India 86/4 (19.1 overs)

# Lyon set to continue with the ball!

# Lyon continues with the ball!

# Stoinis set to bowl his third over!

# Lyon into his second over!

# Nathan Lyon into the attack!

# Marcus Stoinis set to bowl his second over!

# MS Dhoni is the new batsman in!

When the 'Lion' walks out to bat in his den #INDvAUS pic.twitter.com/WKRKGpKgaB

# Wicket! Ambati Rayadu departs off the second delivery of the over as Cummins generates some late seam, with the ball going on to hit the stumps! India 27/3 (6.2 overs)

# Ambati Rayadu is the new batsman in!

# Wicket! Sharma departs for 14 after being adjudged lbw following a seaming delivery by Pat Cummins which hits him on the pads. India 15/2 (4.3 overs)

# Virat Kohli is the next batsman in!

# Wicket! Shikhar Dhawan departs for 1 as the opener fails to generate any proper connect off a Jhye Richardson delivery, with Maxwell completing a fine catch. India 11/1 (3.3 overs)

# Sharma gets off the mark with two boundaries from the over, which added eight runs to the Indian total. India 11/0 (3 overs)

# Cummins set to bowl his second over!

# Maiden over by Richardson!

# Jhye Richardson set to bowl the second over!

# Indian openers Shikhar Dhawan and Rohit Sharma are set to kick off the chase, with Pat Cummins set to open the bowling for Australia!

# Jasprit Bumrah will bowl the final over of the innings!

# Mohammed Shami set to bowl his final over!

# Jasprit Bumrah set to bowl his 9th over!

# Mohammed Shami set to bowl his 9th over!

# Bumrah set to bowl his 8th over as well!

# Mohammed Shami set to bowl his 8th over!

# Alex Carey is the next batsman to the crease!

# Wicket! Peter Handscomb has been dismissed for a duck after being adjudged lbw after missing the turn off the delivery. Australia 263/5 (43.4 overs)

# Peter Handscomb is the new batsman in!

# Wicket! Shaun Marsh departs for 7 after handing a catch to Vijay Shankar off the second delivery of the over. Marsh attempted to go for a big hit without generating any proper contact. Australia 263/4 (43.2 overs)

# Kuldeep Yadav is set to bowl his final over of the spell as well!

# Ravindra Jadeja set to bowl his final over!

# Marcus Stoinis is the new man in!

# Wicket! Glenn Maxwell departs for 47 after attempting a quick single off a Kuldeep Yadav delivery, without much success as he is dismissed following a Ravindra Jadeja throw. Australia 258/3 (42 overs)

# Kuldeep Yadav set to bowl his 9th over!

# Jasprit Bumrah into the attack!

# Shaun Marsh comes to the crease!

# Wicket! Khawaja departs for 104 after handing a catch to Jasprit Bumrah at midwicket off a slower delivery. Australia 239/2 (38.3 overs)

# Mohammed Shami into the attack!

# Ravindra Jadeja continues with the ball!

# The 193 from Aaron Finch (93) and Usman Khawaja (92) was Australia's highest opening partnership in an ODI since Finch and Warner hit 231 against India at Bengaluru in September 2017.

# Glenn Maxwell is the next batsman in!

# Wicket! Aaron Finch has been dismissed for 93, after failing to negotiate a turning delivery by Kuldeep Yadav, which goes on to hit the stumps. Australia 193/1 (31.5 overs)

# Mohammed Shami into the attack!

# Vijay Shankar continues with the ball!

# Mohammed Shami is back into the attack!

# Vijay Shankar is set to bowl his third over!

# Mohammed Shami is back into the attack!

# Kuldeep will bowl his second over!

# Kedar Jadhav is set to bowl his second over!

#Australia 88/0 (15 overs) with Kedar Jadhav introduced into the attack in the 14th over, conceding 13 runs!

# Vijay Shankar introduced into the attack!

# Australia 44/0 (9 overs) as Kuldeep Yadav is introduced into the attack!

# 9 runs off the over, as Dhawan drops a possible catch which could have resulted in Khawaja's dismissal. Australia 34/0 (7 overs)

# Mohammed Shami and Jasprit Bumrah continue with the ball, as Australia reach 25/0 (6 overs)

# 8 runs from the second over as India lose a review following a dodgy lbw referral! Australia 14/0 (2 overs)

# Jasprit Bumrah will bowl the second over!

# Australian openers Aaron Finch and Usman Khawaja are set to kick off the innings with Mohammed Shami opening the bowling for India!

# Ravindra Jadeja is all set to play his 150th ODI clash today!

# To pay homage to the martyrs of the Pulwama Terror Attack, the players will donate today's match fee to the National Defence Fund!

To pay homage to the martyrs of Pulwama Terror Attack, the players will donate today's match fee to the National Defence Fund #JaiHind pic.twitter.com/vM9U16M8DQ

# TeamIndia will be sporting camouflage caps today as a mark of tribute to the loss of lives in Pulwama terror attack and the armed forces!

And to encourage countrymen to donate to the National Defence Fund for taking care of the education of the dependents of the martyrs #JaiHind pic.twitter.com/fvFxHG20vi

# The hosts are fielding an unchanged 11 while Jhye Richardson replaces Nathan Coulter Nile in the lineup for Australia!

# Indian skipper Virat Kohli has won the toss and opted to field!

Skipper and selector check out the strip #INDvAUS pic.twitter.com/W9T5NkA53v

# Fans in Ranchi will be looking forward to watching local hero MS Dhoni make his presence felt yet again!

MUST WATCH - The @msdhoni aura in Ranchi

In this video capsule, we try to capture the euphoria around MS Dhoni in the dressing room & his aura in his hometown in Ranchi - by @28anand

Mahendra Singh Dhoni's homecoming forms a poignant subplot of an utterly dominant Indian team's quest for an unassailable 3-0 lead in the five-match ODI series against Australia on Friday.

Amidst the emotional side story, the Indian team is grappling with a few teething issues regarding its top-order batting, especially senior opener Shikhar Dhawan's poor form, which has affected India's starts of late.

Despite Dhawan having gone off the boil with only two half-centuries in the last 15 ODIs, India are unlikely to tinker with the winning combination of the first two encounters.

KL Rahul, who is back in form, may have to wait till India clinch the series, but the team management could well try him out at the No. 3 position.

The two victories -- by six wickets and eight runs -- weren't exactly convincing but pulling off close matches under pressure will certainly add to the confidence.

"Just coming through these kinds of games gives us confidence. It's important to look ugly at times, and come through and win. We might get these low-scoring games in the World Cup as well," Kohli had said after the second game.

The bowling has been superb in both games with Australia failing to reach 250 but save Virat Kohli, who stamped his class with another hundred on a slow Jamtha track, none of the other batsmen have looked the part so far.

Vice-captain Rohit Sharma, the second most consistent player in this line-up, looked good in the first game before he got out.

Kedar Jadhav and Dhoni shepherded India in the first match and didn't trouble the scorers in the next.

Ambati Rayudu, whose only significant knock was the 90 against New Zealand in the last away series, has also been inconsistent and can be replaced with Rahul.

Rayudu, who has retired from first-class cricket, has found it difficult and his primary problem has been not being able to rotate the strike.

If Dhawan is persisted with, the best way to give Rahul at least three games is to bring him at No. 3 and the skipper coming at No 4 in place of Rayudu.

There are no such worries about the Indian bowling as they have performed as a unit. The biggest gain in the second game has been Kedar Jadhav and Vijay Shankar performing their combined role of a fifth bowler to perfection.

Shankar's two wickets while bowling the final over will also instil confidence in his captain that in case Hardik Pandya has a breakdown, he has a fallback option in the Tamil Nadu all-rounder.

However, he is still not somebody who can bowl six to seven overs consistently in each game.

Mohammed Shami and Jasprit Bumrah have been outstanding in the two games so far. If Shami was lethal during the opening spell of the first game, Bumrah set it up with another incredible effort at the death in the second.

One player who is quietly inching towards a slot in the World Cup-bound squad is Ravindra Jadeja, who has bowled brilliantly in those middle overs in tandem with Kuldeep Yadav.

Siddarth Kaul has gone back and it's clear that he is not the back-up pacer while Bhuvneshwar Kumar is back after being rested.

His direct throw to dismiss Peter Handscomb once again proved his utility in the field, more so in the 30-yard circle.