Bharatiya Janata Party (BJP) leader Subramanian Swamy on Thursday alleged that saffron party's victory in the by-poll to Rajouri Garden Assembly seat exposes the fact that Delhi Chief Minister Arvind Kejriwal is a universal fraud, who will be thrashed in all elections as the people feel betrayed. 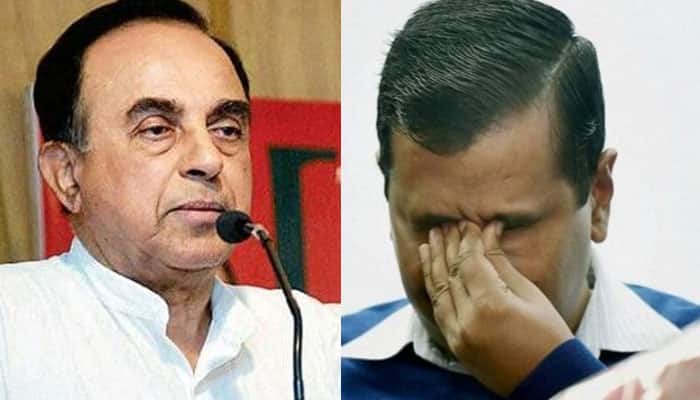 New Delhi: Bharatiya Janata Party (BJP) leader Subramanian Swamy on Thursday alleged that saffron party's victory in the by-poll to Rajouri Garden Assembly seat exposes the fact that Delhi Chief Minister Arvind Kejriwal is a universal fraud, who will be thrashed in all elections as the people feel betrayed.

Swamy said the people are now turning against the Aam Aadmi Party (AAP) supremo as they feel betrayed.

"So, the enthusiasm with which they came for him, they feel betrayed and, therefore, are disappointed. They will thrash him everywhere. They have already thrashed him in Punjab. They have thrashed him in Goa and now they are thrashing him in Delhi," he told ANI.

Responding to a poser on the opposition parties taking the ongoing controversy over the Electronic Voting Machines (EVMs) to President Pranab Mukherjee's doorstep, Swamy jocularly remarked that none of them has done any study.

"The people are laughing and many people are ashamed to say the Congress is opposing EVM. So, Amarinder Singh has always been a man who gets worried about his own image at the cost of party. So, he has taken a stand," he said.

"Out of 20 VVPAT (Voter-Verifiable Paper Audit Trail) constituencies in UP, we (BJP) have won 17. So, how can you say that if there was VVPAT (then) the BJP would have been defeated," he added.

Going against the party line over the EVM row, Punjab Chief Minister Amarinder Singh yesterday said that if the VVPAT machines were tempered with then the Congress wouldn't have won elections in the state.

The Congress won 77 of 117 seats in Punjab making a comeback after a decade.

The Congress Party, however, today attempted to differ from the Chief Minister's assertion while reminding him that he had himself demonstrated how the EVMs can be gerrymandered.

Congress leader Manish Tewari said Singh had himself demonstrated as to how the EVMs could be manipulated, when he was the Punjab Congress Committee (PCC) president in 2001.

"The Chief Minister of Punjab is a respected leader, but few years back in 2010 and even in 2001, when he was the PCC president, he had himself demonstrated as to how the EVMs can be gerrymandered," Tewari told ANI.

The Election Commission has issued a challenge to all political parties to prove that the EVMs can be tampered with.

This came after the Congress, Left, AAP and others claimed that the EVMs were tampered with to favour the BJP.