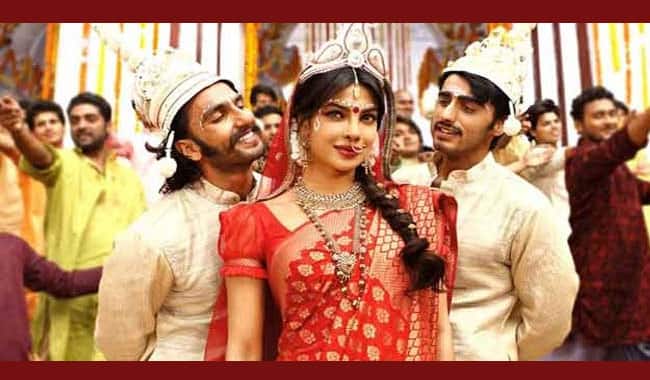 Two young boys thrown together by circumstances grow up together to become best friends and the biggest goons in the city. The entire premise of the movie is about how two young boys stepped into the world of crime and coal thievery because of the world doing wrong to them when they were children. In their own words they had to literally survive by snatching their right from others. In addition to all their woes, both of them fall in love with the same woman. Seems straight of a 80s flick, isn`t it? If that is not enough, even the setting, the style, and the colours of the entire shoot are straight out of that era.

Ranveer Singh and Arjun Kapoor star in the latest Yash Raj Production `Gunday` and they pull it off in a typical masala style Bollywood movie. All in all it is entertaining. Both Ranveer and Arjun as Bikram and Bala respectively look really hot, with rippling muscular machoism oozing out in each of their scenes. Priyanka Chopra as Nandita is sizzling in most scenes, especially in one of the scenes where she puts up the Sridevi act from `Mr. India`s `Kaate Nahi Kat te...`. Irrfan Khan is formidable in his role as Satyajit Sarkar, but that`s stating the obvious. Irrfan has the best one liners in the movie, while Saurabh Shukla has a small but convincing role.

But there is a basic problem with the whole thing; when you are making a movie based on an era, it shouldn`t mean that you leave gaping holes in the plot like the action classics of the yore. While one may chose to ignore all the dramatic twists of an Amitabh or Mithun starrer, the audience now does want a little more. The movie is also predictable, and really slows down in the middle. The pace of the action too is a little too slow and at times even tacky in the age of fast paced thrillers. The twists and turns of the movie are all expected and not much thought seems to have been put for that.

The director Ali Abbas Zafar, whose last release `Mere Brother ki Dulhan` received only a lukewarm response makes a good attempt at action drama `Gunday`. But the attempt has not converted into a compelling watch. It is great for those who love the romance, and the melodrama along with the action. The younger generation will definitely enjoy the movie. Especially the dialogues written by Ali Abbas Zafar, Sanjay Masoom like “Pistol ki goli aur laundiya ki boli jab chalti hai ... toh jaan dono mein hi khatre mein hoti hai”, which are really reminiscent of old Hindi movies.

The music by Sohail Sen is spunky especially `Jashn e Ishqa` and `Tune Maari Entryan` were both fun and placed well. Priyanka looks ravishing in the cabaret number `Asalaam-e-Ishqum` and carried her sarees with grace throughout the movie.

Again to sum up, the entire look and feel of the movie is of 80s Bollywood. It`s like travelling back in time, where there were no metro-sexual heroes and toned modern heroines. It is not a Valentine’s Day date, but the men should make a day out to celebrate their friendship with this movie. Though the film has nothing new to offer, one can watch it for nostalgia’s sake!